Posted in: Disc Reviews by Archive Authors on November 15th, 2012 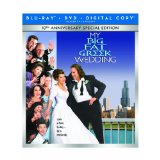 “Nice Greek girls are supposed to do three things: marry Greek boys, make Greek babies, and feed everyone until the day we die.”

If ever a movie could be negatively affected by monstrous box office numbers, it’s My Big Fat Greek Wedding. When a five-million-dollar film rides a tsunami of critical buzz and excellent word-of-mouth past the two hundred million dollar box office gross (finally ending somewhere over $230 million), it’s impossible to see it for the first time completely free of expectation. Perhaps this was my mistake, because I went into my first viewing of the king of sleeper hits excited to a super-duper romantic comedy. …I’m not sure exactly what I was hoping for. Was it a hearty helping of belly laughs? This film offers sparse and modest chuckles at best. Perhaps it was some sort of originality within its predictable story arc. Instead, this is a by-the-numbers romcom with by-the-numbers romcom characters. Maybe I was hoping for a film that could at least approach capturing the profundity of love, or the reality of struggles with culturally divergent family values. Whatever it was, I felt pretty unfulfilled by the time it was all over, even though I found the movie reasonably enjoyable.

Toula, as the film’s narrator, is probably the closest the film gets to a real person, thanks in large part to Nia Vardalos’s writing and performance. Vardalos plays Toula with a fantastic knack for deadpan and a real sincerity about her that makes her a likable and identifiable woman. Her insecurity post-makeover, pre-engagement is particularly noteworthy. It’s everyone around her that I found annoying and worse, poorly drawn. The relatives are all stereotypes (but no one is gay!), funny accents and idiosyncrasies, from father to annoying cousin. Her aunts are all busybodies, her uncles all drink Uzo, everyone is in everyone’s face…they stop just short of having baklava all over their faces and wearing togas. The character who lacks the most, though, is the betrothed, poor Ian himself.

The story seems to equate this “unattainable” man myth with puppy dog eyes, no questions asked, and absolutely no balls. It’s impossible to believe that Ian (played acceptably by John Corbett) would go through what he does without friction about it arising even once. The film makes no effort to show why Ian is so into Toula; we’re just supposed to accept it, which hurts the film immensely. I’d have liked to see the realistic discussion where Toula tells Ian she’s not marrying him unless he’s baptized Greek, and unless he speaks Greek, and unless he basically tries to be as Greek as possible. I’m surprised he didn’t have to join a fraternity. He wouldn’t once have asked “Why can’t your family like me for who I am? You do, don’t you?” He never once suggests “Why do I have to do all this stuff for your family, but my family is just along for the ride? Don’t they count?” I’m not asking for some huge conflict, but some sort of detail as to why he’d do it, or even some better evidence that he loves Toula as much as he must, would have helped flesh their relationship out a tad. As it’s currently constituted, Ian doesn’t come off as sensitive and loving; he comes off as emasculated, being bullied around by his fiancée’s family’s outlandish demands.

For a regular-sized romantic comedy, My Big Fat Greek Wedding is a perfectly acceptable effort, hitting almost all of the notes these movies seem to. The only element it lacked is that there was no evil “Johnny / Randy,” no cad ex-boyfriend to show up drunk at some family event, forcing Ian to reluctantly fight him in Act III, defending his woman’s honor. You know the scene, where the whole family goes quiet, the music stops, and despite being provoked, Ian says “I don’t wanna fight you, man,” and Johnny / Randy would holler “Hey pretty lady! Why don’t you come over to my apartment later, and I’ll show you what a real man is!” Then he’d push Ian once too many times, and Ian would land one triumphant uppercut, sending Johnny’s / Randy’s limp body sailing into a fountain or empty garbage can. Toula could then quip, “As the husband, I guess it’s your job to take out the trash.” Then the family would laugh, and credits would roll. Is it any wonder I’m not a successful Hollywood screenwriter? Since Ian was such a wussbag, he probably would have just gotten his ass kicked anyway, and Johnny would have had his way with his woman, so perhaps the omission is for the best.

It’s a light, fun, cute little movie, but I can’t say that I thought it was anything special even within its own genre (I thought Bridget Jones’s Diary was far more entertaining and realistic). It’s a pretty standard romantic comedy where, of course, love comes out on top. I was tempted to round this film’s fair 3.25 up to a 3.5 because of its quality within its genre, but I chose to deduct the quarter point for giving Joey Fatone a speaking part. Take heed, future filmmakers.

My Big Fat Greek Wedding is presented in its original aspect ratio of 1.85:1. The 1080p image is arrived at with an AVC MPEG-4 codec at an average 30 mbps. The colors are a bit soft, and I really can’t say I was impressed much by this high-definition image presentation. While there weren’t any real flaws to speak of, the sharpness was not up to par with other films of its relatively young age. There is an element of realism, I’ll admit, but nothing here is going to blow you away. Black levels are as average as every other standard here.

The DTS-HD Master Audio 5.1 is also pretty average. As one might expect, Wedding collapses into the front three speakers, and even there has precious little to offer in the way of audio dynamics. The bulk of the work resides in the center channel. Thankfully, clarity is never an issue, with crystal clear dialog playing through the center channel and an ethnic-Greek infused musical score by Alexander Janko the main occupant of the lateral speakers.

There is an Audio Commentary starring director Joel Zwick (recorded separately) and actors John Corbett and Nia Vardalos. The latter interact well with each other, but the lion’s share of the blah blah comes from Vardalos, who also wrote the screenplay. It’s sort of fun to listen to her talk about the real life people and events that sparked her ideas, as well as what it was like to find stardom so unexpectedly.

A Look Behind My Big Fat Greek Wedding: (29:33) Nia Vardalos talks about the autobiographical nature of the film. There are clips from her original one-woman show. There are also quite a few moments with her and John Corbett.

Deleted Scenes: (5:00) There is no way to access them individually.

While I didn’t quite get what it was that drove this little movie to box office numbers and general acclaim that many producers would eat their firstborn children for, My Big Fat Greek Wedding is 95 minutes of genuinely innocuous cinema.