Posted in: The Reel World by Gino Sassani on November 21st, 2012 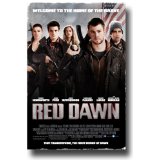 “For them this is just some place. For us it’s our home… it’s up to us to fight for it.”

For decades it was the doomsday scenario. Cold War Americans lived in almost constant fear that the Soviets might drop a nuke on us and begin Armageddon. It was unthinkable that a conventional invasion could reach our shores instead. Red Dawn stirred its own mushroom cloud of controversy when it reached theaters in August of 1984. While the Cold War was actually closer to its end than any of us might have suspected, Red Dawn entered our collective consciousness as a shock to a system that had for some time moved beyond the culture of fear those older than myself knew growing up. Now nearly 30 years later the Soviet Union is no longer, and the Cold War is something many Americans have never even experienced firsthand. We have new enemies, and so we now have a new Red Dawn.

This time it is North Korea that invades a small all-American town. They first use an EM Pulse weapon that knocks out the town’s electrical grid and most sophisticated technology. The ground attack follows, and within hours the invaders have captured the town. What the invaders did not count on was a group of high school students who would name themselves after their school mascot, the Wolverines. They are led by Iraqi War veteran Jed Eckert (Hemsworth). Jed happens to be visiting at the crucial moment and is trying to help his younger brother, football star Matt (Peck) to grow up a little. Matt will now have his chance. The group becomes a fighting force under Jed’s training and begins a series of sabotage and raiding missions to weaken the occupation force and rally the citizens to believe there is still something to fight for. They are assisted later in the film by a small seal team led by Col. Andy Tanner (Morgan).

While the themes of the two films are essentially the same, first-time director Dan Bradley sets his own course. Some things he actually does better. The original film was a bit sketchy about how the invaders snuck up on middle America and was vague on what was happening in the rest of the country. This version’s EMP weapon does a clever job of answering those questions. There is also a more focused mission once the Wolverines meet up with the Seal Team. The film also takes advantage of the advancements in f/x and camera equipment. The action is a quantum jump from what we saw in 1984. It’s a more visually pleasing film, to be sure.

But the film has two flaws when compared to the original. The first is completely unavoidable. While John Milius was able to take his audience by surprise, that wasn’t going to be completely possible here. The original film had a controversial scene of the Wolverines dealing with a traitor in their midst. It was a powerful scene that you likely haven’t forgotten if you’ve seen it. Any innocence Milius could exploit in a 1984 audience has perished years ago. The second problem is not so unavoidable. While the cast is an excellent one, to be sure, this film lacks some of the heart that came from the first film. It is too polished at times, and we miss out on the moments between the coming-of-age characters. Some of that is certainly captured by Hemsworth and Peck’s attempts to bond as brothers. The truth is I don’t think I ever bought it, and Bradley attempts to force the issue with a contrived emotional final scene. The film works best as a standard action film.

It’s hard not to take into account some severe handicaps Bradley was dealt, and on his first big film, no less. The film was finished in 2009, but studio bankruptcy ended up putting the project on the shelf. It might have stayed there or ended up a direct-to-video film if not for the explosive careers of Hemsworth with Thor/The Avengers and Josh Hutcherson with Hunger Games. Suddenly what were two relative unknowns became bankable box office stars. So the race was on to somehow freshen up a 3-year-old film. In that film the invaders were the Chinese. Just as suddenly, the studio decided it did not want to alienate a couple billion potential customers, and the decision was made to make the invaders North Korean. Mind you, this was after the film was already shot. Bradley had the unenviable task of replacing dialog, flags, symbols, and important plot points. I have to give Bradley credit for making the film as cohesive after all of that as he eventually did. I’m not sure that any director could have done any better with these demands and limitations. Because of this the film often appears uneven with some noticeable editing issues and pacing nightmares. A hastily thrown together montage of Obama and other politicians in news clips is intended to add authenticity but reeks of the attempt.

The film does score with the rah-rah moments, and the audience certainly got into the action bits. It’s not a bad film at all, and I would love to see what Bradley had originally intended for his cursed film. Tom Cruise and Nicole Kidman’s adopted son Conner Cruise gets a few moments in his first real part. But when it was filmed, there were no real names associated with this cast outside of Jeffrey Dean Morgan in the Powers Booth role. But it’s another thing the two films do have in common. After the first film stars like Charlie Sheen, coincidentally another actor’s young son getting his first real break, a pre-Back To The Future Lea Thompson, Patrick Swayze, who up until then was mostly known for bit television roles, and C. Thomas Howell. Unfortunately, this time the new stars broke out while their version of Red Dawn sat on a shelf. And their film suffered at the mercy of a studio system whose only job here appears to be “to create chaos.”

Gino Sassani is a member of the Southeastern Film Critic's Association (SEFCA). He is a film and television critic based in Tampa, Florida. He's also the Senior Editor here at Upcomingdiscs. Gino started reviewing films in the early 1990's as a segment of his local television show Focus. He's an award-winning recording artist for Omega Records. Gino is currently working on his 8th album Merchants & Mercenaries. Gino took over Upcomingdiscs Dec 1, 2008. He works out of a home theater he calls The Reel World. Favorite films: The Godfather, The Godfather Part II, The Body Snatcher (Val Lewton film with Karloff and Lugosi, not the pod people film), Unforgiven, Gladiator, The Lion King, Jaws, Son Of Frankenstein, The Good, The Bad And The Ugly, and Monsters, Inc.
I Heart Shakey Contest: Win Moms To The Rescue Collection From Lifetime