Posted in: Disc Reviews by William O'Donnell on November 21st, 2012 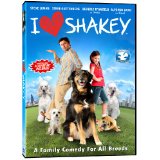 A single father gets a major job offer working in a prestigious Chicago restaurant, but the job requires him to move his entire family from out of their hometown of Toledo. They are set up with a new apartment but their dog, Shakey, is not permitted in the building. This family must then decide whether staying for this swanky job is worth losing a member of the family, or is there any other alternatives to losing Shakey?

I have had a bad string of luck when it comes to reviewing films that place “Family Approved” on their cover. To me, this has become a badge of low quality. Alas, this film is not the redeemer I’d hope it would be but it does have a couple bright spots I shall mention.

Before I get too critical I should compliment the lead cast. Steve Lemme and Rylie Behr are charismatic and talented actors. There characters are the only pair to act normal in this entire film. Surrounding them are cartoonish caricatures of villains and goofballs. At one point we literally get a montage of potential dogsitters that includes the couple from American Gothic (the painting), a butcher who may serve dog, a homeless man who thinks he’s a dog, and a clown with the least charming enthusiasm I’ve ever witnessed (and I’ve seen dead clowns in some films). Despite being trapped in a strange world with these characters, Lemme and Behr’s characters go through a humane journey that can be touching at points.

Steve Guittenberg gets top billing on the DVD case but his role is only slighter bigger than a cameo. As delusional, military-man Sgt. Stubbs, Guttenberg actually delivers the lone hilarious moment in the entire film. I know this is subjective since I’m sure young children will love the cliché dog hijinks and food fights, but when he is telling the story of how he lost his true love, which at first we think is his wife but turns out to be his machine gun he lost in a lake while firing wildly at ducks had me laughing out loud (or should I say “LOL” since this is being published on the internet?).

This is a very light-hearted family film but there are some surprisingly crass elements snuck in. When a celebrity chef is praising our hero’s work he keeps spouting his motto “Keep your eye on the balls” and everyone makes note of the plural use and emphasis placed on “balls.” As well, there are several animated portions placed throughout the film for exposition and one such animation features Shakey peeing onto the faces of ‘snooty’ dogs from a high-end kennel. I know urination is infamously juvenile in humour but having faces soaked in it seems a bit cruder than what this film’s tone is supposed to be.

There is talent in this cast but for his first attempt at directing, Kevin Cooper has made some poor choices and relies too heavily on wacky performances from the supporting cast to try to get interest in the story.

Widescreen 1.78:1. The picture is rather clear. Perhaps this is a testament to the high-end, 3D cameras used to film it. The colour in the animations is very bright and there are no notable flaws worth mentioning.

Dolby Digital 5.1 and 2.0 are available. There are some issues with the syncing of the dialogue to people’s lips that I notice right from the start and happens, on-and-off throughout the film. My ears detect this when they try to mix in audio recording in post-production and it sits too much on the surface or doesn’t match actor’s mouths.

Beyond that, the audio sounds decent in the surrounding speakers. There is nothing too dynamic that occurs but it is a good mix of score and diegetic sounds.

The Making of I Heart Shakey: A pretty standard telling of the production that became very confusing for me when the focus went completely onto how this was a 3D film. This DVD release is not 3D nor had it come up anywhere else and yet here is the entire cast and crew going on and on about how great it is to use 3D technology for this film.

Who is Shakey? – The Story of Ebony: The story of how they tried to find a well-trained dog for the film and found a great trainer and her dog, Ebony, to play the title character.

Rylie Behr – Behind the Braids: Behr has epilepsy but this was not the story of some charity case where she got the role out of sympathy, or even had to overcome great odds to get it. She truly is a talented young actress, with a supportive family, and this feature highlights these facts.

Sgt. Stubbs – The Inside Story: Steve Guttenberg is given a couple minutes of extra airtime here.

Mattias Ober – Rise to Fame: Three of the performers riff on a joke in character.

Steve, Rylie and Ebony Having Fun on Set: 25 seconds of our main characters singing a sassy rhyme.

On Set with Billy Dec: Highlighting the cameo made by a Chicago based mover/shaker.

Music Videos:
1. Life as it is: A group of teenage girls perform a song (out of their homes apparently) along with some clips and animations from the film.

2. Gravity: A soft country ballad. Like the other video it is a mixture of the artist playing crossed with shots taken from the feature film.

Petfinder PSAS: Ebony, who plays Shakey, is a rescue dog. In honour of this they inlcuded some ads for a great organisation called “Petfinder” featuring:

Epilepsy Canada: Some text explaining Rylier Behr’s condition and that you can get additional information by placing the disc in your computer. A very good cause to support.

Director’s Commentary: The title is misleading because actors Steve Lemme and Rylie Behr are also a part of the commentary. We are told how this is a rather personal story for writer/director Kevin Cooper since he was aided through a tough period in his life with the help of his own canine companion, Chaplin. Beyond that, we get the standard issue tidbits about shooting and self-praise for what they accomplished. There are some interesting facts about how Cooper used to go to college with Lemme, which would explain how a member of Broken Lizard (who have a string of R Rated comedies to their name) would appear in such a light family film. The Broken Lizard connection also helped them reel in Phillipe Brenninkmeyer (who appeared in some of their films) to play the eccentric celebrity chef Mattias Ober.

Downloadable Activity Kit:If you place the disc in your computer you are able to download some extra features for the kids.

This film has issues with tone and much of its humour and storytelling is too cliche too be very enjoyable. Had this actually been presented in 3D then perhaps something more could have been gained from watching it. In the meantime, this is acceptable but largely forgettable.

For what it lacks in 3D it does its best to make up for in oodles of special features. Fans of this film will be very happy with the bounty they recieve on that front.