Posted in: No Huddle by Brent Lorentson on November 27th, 2012 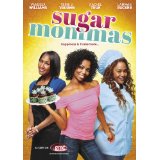 Whether it comes in the form of a mid-life crisis or simply a crisis comes along and changes your life, at some point we all reach a moment in our lives where we reflect on the choices we’ve made for better or worse.  Not every decision we make is one we’ll be proud of, whether it concerns those we have relationships with or choices we make in our careers.  With age people have been known to act out to try and recapture their youth, whether it is in the form of a sports car or perhaps dating someone much younger than our friends and family would find suitable.  Sugar Mommas tackles the mid-life crisis with a balance of humor and compassion that I have to admit surprised me with the execution of its message.

This isn’t a big-budget Hollywood movie, and to be honest had I seen this on the shelf at the store, there would be no chance of me ever giving this title more than a cursory glance.  But I would have passed up something that actually I had to pinch myself for believing I enjoyed this movie.  A little movie about three women who own a bakery. During the week leading up to a tasting for a potential big money client, all three of the women have to come to terms with personal crises that have come to a head at the same time.  There’s Sheila (Terri J. Vaughn) who has become obsessed with the urge to have a baby, Lynn (Vanessa Williams) who is a middle aged woman currently dating a 22-year-old up-and-coming rapper, and Tommi (Rachel True), who is in a crumbling marriage.  Each of these women is likeable and relatable, but none of them can seem to see the damage they are bringing into their lives.

The problem I usually have with these “chick flicks” is that most of the time the situations or characters feel too quirky or get involved in situations that are just there for the comedic laughs (looking at you, Bridesmaids).  What hooked me was watching these women trip and fall through their mistakes to only worsen their situation, and not for a cheap laugh.

The writing and the performances here are great. I wish a little more time had been put in showing the split developing with Tommi and her husband, but instead we are only given glimpses into this falling-out.  One of the painfully awkward moments follows the confrontation of Tommi and her husband where after she leaves him after an argument he begins to sing a ‘woe is me’ kind of song that instead of igniting sympathy only made me want to chuckle.

What hinders the film is its inability to immerse us into the world.  The bad stock footage cutaways between set changes and the action being shot on a soundstage simply hurt any momentum the film had going for it.  I have nothing against the theatre, but it’s been my experience that performances on for the stage are best viewed as a live audience member.  Maybe I’m being nitpicky, but this kind of filmmaking simply doesn’t work for me at all, and when you throw in laugh tracks it simply tarnishes the project even more.  As a play, my rating would be much higher than what I’m giving, but I have to grade this as a whole, and it’s the little things that bring this down and spoil a good thing.

Brent Lorentson is a horror writer and film critic based out of Tampa, Florida. With a BA in Digital Film, he co-wrote and co-directed Scavenger Hunt. His short stories have appeared in various horror anthologies. In 2019 his short script Fertile Blood will be a part of the anthology horror film Slumber Party. He is currently working on his first novel A Dark and Secret Place set to be released in late 2019. Favorite Films: Taxi Driver, Fight Club, I Saw the Devil, The Wild Bunch, Dawn of the Dead, A Clockwork Orange, Pulp Fiction, Heathers, The Monster Squad, and High Fidelity.
Christmas in Compton Top Shot: Season 4