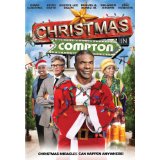 “‘Twas the night before Christmas, and all through the hood/Not a hater was stirring, cuz it was all good.”

With Thanksgiving in our rearview mirror, ‘tis officially the season of packed shopping malls and cheesy Christmas movies. Most of these flicks will air on ABC Family or the Hallmark Channel over the next few weeks, but Santa got ahead of himself and recently delivered Christmas in Compton to my doorstep. Though the film has more on its mind than its dopey cover art suggests, I kinda wish Santa had also left me a gift receipt.

Big Earl (Keith David) is the owner of a popular Christmas tree lot in the titular city. He is a major personality who demands hard work and success out of everyone around him. (His unofficial motto is, “No excuses. You are in charge of your own life!”) Unfortunately, the biggest failure in Big Earl’s life is currently crashing in his garage. Earl’s son Derrick (Omar Gooding) is a fast-talking layabout who grudgingly works for his father while trying to break into the music business.

Derrick is working with a sleazy record exec (is there any other kind?) played by a sleazy Eric Roberts (is there any other kind?) to land a record deal for a girl group he manages. Tommy Maxell (Roberts) ripped Derrick off years ago, and he’s trying to rip him off now. (The movie doesn’t bother explaining why Derrick would want to do business with someone who has already ripped him off, but let’s move on.) When Big Earl suffers a mild heart attack, Derrick has to take on more responsibility with the family business. In his desperation to prove to his father that he’s not a failure, Derrick winds up putting the tree lot in jeopardy. By the end, the entire community has to band together to try and save “Compton Christmas Treez.” And if you’ve seen any Christmas-themed movie, you can probably guess whether or not they succeed.

It’s almost a shame to have to spend so much time talking about this movie’s plot and storytelling because those are absolutely not the film’s strengths.

The biggest problem is the character of Derrick, who starts off the film as a corner-cutting hustler and ends up as a slightly humbled corner-cutting hustler. We’re supposed to see some big transformation, but for all intents and purposes Derrick is completely ill-equipped to be a successful music executive. (He appears to be allergic to reading anything he signs.) Christmas in Compton could’ve also easily been trimmed by about 15 minutes because the movie throws in a handful of characters that aren’t totally necessary. For example, Porscha Coleman is perfectly lovely as the single mom Derrick woos, but their romance doesn’t really have anything to do with anything.

Instead, the stuff that works in Christmas in Compton has to do with the details you don’t see in typical holiday movies. I’m talking about the unglamorous parade during the opening credits that tells you this won’t be a typical, shiny Christmas flick or Big Earl’s rant against Kwanzaa. It’s worth mentioning that the movie doesn’t shy away from potentially offensive stereotypes. (More than one character tries to pay for something with food stamps. Koreans and Mexicans aren’t safe either.) However, it’s been my experience that stereotypes — even the ones we don’t like — have at least some basis in reality and director/co-writer David Raynr sneaks in some genuinely funny lines.

More importantly, the movie gives the great, underused Keith David — who has stolen scenes in everything from The Thing to Platoon to There’s Something About Mary — extended screen time. The actor is an imposing screen presence, so the movie suffers a bit when Big Earl is somewhat sidelined by his heart attack. Despite the problematic character he plays, the story is ably carried by Gooding, who previously showed off surprising dramatic chops on ESPN’s short-lived drama Playmakers but relies more on his portly charm here. Gooding is at his best, however, when he’s sharing the screen with David, and their father-son scenes carry a surprising dramatic weight. Meanwhile, Eric Roberts does shady “Eric Roberts” things as the record exec who’s actually not that bad compared to Derrick, while Miguel A. Nuñez scores some laughs as a seedy, oddly competent/honorable pawn shop owner named Delicious.

The music — with hip hop-flavored original songs by Luke Christopher — and the presence of characters named “Pookie” and “Squeaky” both scream “Compton.” However, the film’s message about the importance of community and hard work, and the father-son dynamic between Big Earl and Derrick — Derrick wants to forge his own path, while Big Earl is terrified that his son will fail in a cutthroat business — applies to people well outside Los Angeles County. Turns out Christmas in Compton has a surprisingly universal message.