Posted in: The Reel World by Jeremy Butler on November 30th, 2012 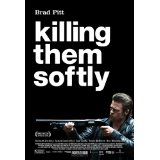 “They cry, they plead, they beg, they piss themselves, they cry for their mothers. It gets embarrassing. I like to kill ’em softly. From a distance.”

Brad Pitt demonstrates that very well during one of his execution scenes. Killing Them Softly is director Andrew Dominik’s adaptation of the 1974 novel, Cogan’s Trade by George V. Higgnins. This film is Dominik’s third go-around serving as both writer and director (the other two times being Chopper and The Assassination of Jesse James), and I must say that he seems at home with double the amount of work.

Dominik made the choice to update the setting of the film, setting the film in 2008 around of the time of Barack Obama’s first campaign for the presidency (which is easily determined by televisions that are visible in the background that clearly show our current president delivering speeches.). Dominick has said about this choice, “as I started adapting it, it was the story of an economic crisis, and it was an economic crisis in an economy that was funded by gambling—and the crisis occurred due to a failure in regulation. It just seemed to have something that you couldn’t ignore”. (This quote is courtesy of an interview Dominik that can be found on Indiewire.com).

Killing Them Softly follows the perspective of its two leads, robber Frankie (Scoot McNairy, Argo) and mob enforcer Jackie Cogan (Brad Pitt, do I even need to list a movie?). During the film, you see Frankie before the heist as he conspires with his partners to knock over a mob-enforced card game ran by Markie Trattman (played by Ray Liotta), you see his desperation and his doubts about going forward with the job, but he eventually swallows all of it and does the job. Afterwards, Cogan is introduced as the enforcer brought in on the behalf of a character shrouded in mystery known only as Dylan, to investigate and bring the responsible parties to justice (mob justice, that is).

Overall the film is a bit on the slow side, and there isn’t as much action as I was expecting; however some real treasures do shine through. The main treasure would have to be the ingenious dialog. The entire film it is usually several different people having back-and-forth conversations, but the conversations are well-written and engaging. One of the most notable conversations is between Cogan and Driver (Richard Jenkins’ character whose name is never given and is known only as Driver on IMDB and Wikipedia); their banter is a literal gold mine. Another great conversation would have to be Cogan’s talks with the oversexed and constantly drunk hit man Mickey (James Gandolfini, another actor’s whose reputation speaks for itself); their conversations are more of a lesson in knowing when it’s time to hang it up and walk away.

Naturally, Brad Pitt is a human chameleon, altering his look and personality to perfectly fit any role he chooses (if he wasn’t an actor he’d be a perfect recruit for the C.I.A.). However there was another actor that I believe held his own, and that’s Scoot McNairy. I believe he excellently displayed the visage of a man down on his luck and in over his head, and for that I commend him.

On the technical aspects of things, I had a couple of problems,such as in the opening with the music, I found it very loud and kind of distorted; might need to check the audio levels. Another case was during the card game heist, while Frankie was giving his hostages orders; it seemed that the background noise of the television was competing with the foreground for my attention. The look of the film however was spot-on; I found it to be edgy and realistic. Very nicely done.

Jeremy Butler is a film school graduate of the International Academy of Design and Technology. He is been writing for Upcomingdiscs since 2012; however, movies have played a big part of his life for much longer. Favorite genres include horror, science fiction/fantasy, and comedy. Favorite movies are V for Vendetta, Boondocks Saints, Kiss Kiss Bang Bang, and The Godfather.
Mannix – The Final Season Holiday Gift Guide Spotlight – MGM’s James Bond 50