Posted in: Disc Reviews by William O'Donnell on November 29th, 2012 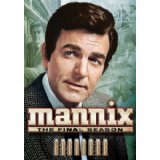 This is the eighth and final season of this slightly offbeat crime drama. Nothing has brought me more joy than seeing that instantly recognizable CBS packaging that is used for older programs being revived onto DVD releases such as Perry Mason or Barnaby Jones. Now Mannix has the opportunity to wow me as I have been before. Will this be a pleasant experience or surprisingly disappointing?

This show is pleasant enough to behold and was certainly surprised by the strange, almost comedic attributes that are injected. To draw this comparison again, I’m not talking about the endearing way that Barnaby Jones always drinks milk in his own series. I’m talking about Mannix getting hired by a politician to while riding a carousal, or surprising a musician at home who is walking on his hands for absolutely no reason whatsoever. Such things do not explain the plot any better nor suit the intensely serious tone these stories always end up taking. There were times where this series was reminding me of Police Squad! (a complete lampooning of shows like Mannix) when it should be demonstrating the seeds being planted for serious crime shows to follow. When a character refers to another as “baby” or says they “dig it” I can understand that as symptoms of taking place in 1974, but this show goes further than that into oddities. Heck, even the opening credits contains a mixture of images that includes gun fights, fights, skiing and Mannix burning his hands on some toast…I just don’t understand what tone this show is trying to set.

I would like to compliment the final episode as being a fantastic finale (even if it doesn’t feel like it’s wrapping the series up at all). The finale has the sort of high stakes action I was anticipating from the series. Instead of keeping a straight face while weirdness floats around him, we get to see some danger without it being juxtaposed with quirky bits. The villains are frightening, lives are lost, there are moments of incredible suspense and Mannix gets to be a man of action without resorting to leaping off of something (which, he does a LOT of in other episodes in this season and others).

Mike Connors seems less energized in this final season playing this private investigator than he has in previous ones, but he still has the goods to be the anchor in each story. Gail Fisher continues to offer very fine performances as Mannix’s secretary. Some of the guest actors leave a lot to be desired but there are some talents peppered throughout (keep your eyes open for John Ritter in a guest spot that has a fair amount of depth considering he’s only in one episode).

Fullscreen. The colours are soft but that is to be expected from a show that aired so long ago. This season may have improved its presentation from previous releases. This could be from the fact that, naturally, the final season would have the youngest film stock or perhaps progressively greater efforts have been made to transfer this show with each season.

English Mono with an English subtitle option. As mentioned before, I’m no stranger to the CBS TVDVD releases therefore I’m very familiar with the mono tracks that come with many of these releases. It is more than sufficient as all the dialogue and score are mixed very well. One day I’d love to hear these 70s scores in Surround. The heavy use of horns would be fantastic in surrounding speakers.

This is set caps off the collection nicely. It can also function as a fine introduction to the show, and you can simply collect the series in reverse order.

You can find reviews for the other seasons of Mannix on this site:
http://upcomingdiscs.com/?s=mannix