The Definitive Document Of The Dead

Posted in: No Huddle by Brent Lorentson on December 4th, 2012 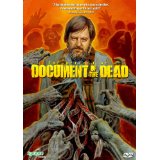 It’s hard to imagine where horror would be right now if George A. Romero never directed Night of the Living Dead.  Just look at the past decade and the slew of zombie releases…if not for Night of the Living Dead none of those movies would have ever been made.  For those of you who can’t miss a single episode of The Walking Dead, yet another thing that never would have been if not for Romero.  It’s not that he created the zombie; he simply created the zombie that we know and relate to today.  He’s the man who set the rules for the zombie and paved the way for the onslaught of gore-filled colloid that splashed across the screen.

For me if asked what my favorite horror film is, without hesitation I would say Dawn of the Dead.  When I first saw this nothing could have been scarier or more awesome than having to be holed up inside a shopping mall while surrounded by the undead.  And since I grew up living across the street from a graveyard, following the movie I was always cautiously on the lookout for any movement around the graves.  To this day one of my favorite pictures is of me with Romero at the premiere for Survival of the Dead.  I just wanted to say this to explain my affection for the Dead series and that when doing this review it’s about a topic a have a deep-rooted respect for.

Document of the Dead was originally a documentary done back in 1978 filmed by Roy Frumkes about the making of Dawn of the Dead.  The first time I actually got to see this documentary was when it came with the 4-disc release of Dawn of the Dead and was one of the supplements.  For those worried that this is the same documentary, you can be assured that though the 1978 footage is here, there is still plenty more that has been compiled over the years.

The footage from the set of Dawn of the Dead is something of a time capsule of the way things were but could never be again.  Watching Romero directing some of the iconic scenes (most involving the biker pie fight), or hearing how the concept of the scene came together where a screwdriver is used to dispatch a zombie is simply the kind of stories film geeks love to hear about.  Another highlight is a discussion the filmmaker has with Tom Savini (makeup artist and actor) while we see time-lapse footage of him applying makeup for a couple of zombies.  For those who haven’t seen the original documentary but are fans of Dawn or are aspiring filmmakers, seeing this documentary is already essential viewing.

As for the new stuff, there is plenty that fans will appreciate.  There is footage from a reunion party of sorts where cast and crew members from the different Dead films are together talking about their memories from the film.  This is all shot very candidly and we get an unfiltered look at those involved, and everyone seems to have nothing but fond memories to retell.  This portion goes on a bit long, but for fans watching the DVD I’m sure none of this will seem the least bit boring.

We also get to see more behind the struggles that took place following the success of Dawn and Night and about the rights issues surrounding Night of the Living Dead.

The documentary goes on to follow Romero as he films the new set of Dead films.  While on the set of Land of the Dead we see how the new zombies have become more modernized and how Romero is coming to accept that he is a cultural icon.  The footage continues all the way up to the filming of Survival of the Dead.  Though times have changed, it’s good to see the man behind the camera still remains the same.

I’m glad Frumkes and his team put this definitive version of their documentary out.  Synapse did a great job with this release, and I hope this reaches beyond just the hardcore Romero fans.  What separates this from just your average making-of is that glimpse into the life of an iconic director.  For those who love film or perhaps aspire one day to make a film of their own, this is a must see.

Brent Lorentson is a horror writer and film critic based out of Tampa, Florida. With a BA in Digital Film, he co-wrote and co-directed Scavenger Hunt. His short stories have appeared in various horror anthologies. In 2019 his short script Fertile Blood will be a part of the anthology horror film Slumber Party. He is currently working on his first novel A Dark and Secret Place set to be released in late 2019. Favorite Films: Taxi Driver, Fight Club, I Saw the Devil, The Wild Bunch, Dawn of the Dead, A Clockwork Orange, Pulp Fiction, Heathers, The Monster Squad, and High Fidelity.
Heaven’s Door Exclusive Interview With David Barrett – Director Of Fire With Fire