Posted in: No Huddle by Brent Lorentson on December 4th, 2012 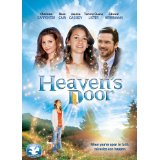 If it was within your power to heal others’ sickness and injuries, would you? Most people’s answer to that question would undoubtedly be yes, but what if the price of healing someone else was to take their sickness on yourself? What would your answer be then? In Heaven’s Door, twelve-year-old Riley Taylor’s life is in shambles. After her mother suffered a miscarriage, her mother lost her faith and has filed for divorce from her father. Her little brother has been diagnosed with asthma, and she witness her grandfather suffer a heart attack and die before her very eyes (wow, that’s a lot to take; I’d crawl up in the fetal position).

Events in her life change after an accident where she slips out of a tree in her back yard while trying to retrieve her soccer ball. The fall from the tree should have killed her; however, on her way down Riley slipped through a portal (that’s right, I said portal); a portal to heaven. As if that wasn’t enough, Riley’s trip through the portal has bestowed her with extraordinary healing powers. Being a girl with a pure and caring heart, Riley decides that the best avenue for her powers is to help the suffering. She starts off small, healing neighborhood animals, and before long she heals her brother’s asthma. It doesn’t take long before she is the talk of the town of Vineyard. Her mother struggles the most with her daughter’s newfound reputation, given her choice to renounce anything to do with angels or Heaven since the loss of her unborn child.

Her mother’s sleazeball boss gets wind of Riley’s abilities and sees dollar signs, wanting to exploit the angle to benefit his business. Riley’s father and grandmother are more open to the idea of Riley’s powers, and slowly but surely Riley’s mother begins to open her eyes, right around the time that Riley’s power begin to take a toll on her. She ends up in the hospital and begins to seem like tragedy will strike this family again.

I have to say movies that are so rooted in spirituality aren’t usually my forte; however there were parts of this film that drew me. First off, I thoroughly enjoyed the performance by Kirstin Dorn; I think she has presence to go far as an actor. Other actors in the film are Dean Cain, Charisma Carpenter, and Joanna Cassidy. Now I liked Dean Cain in Lois and Clark, and loved Charisma Carpenter in Angel, but here not so much. I just didn’t buy them as a married couple, even an estranged married couple. The chemistry just wasn’t there. Joanna Cassidy was spot-on as the intrusive albeit ultimately helpful grandmother.

Story-wise, it’s an intriguing idea, and there are attributes to the film that tug the heartstrings. When the story really grabbed me was towards the end, during Riley’s time in the hospital. The underline emotion of the film was so powerful that I found myself having to fight back a few tears. For a movie to provoke that kind of response in me, I have to stand up and give it the recognition it deserves.

Brent Lorentson is a horror writer and film critic based out of Tampa, Florida. With a BA in Digital Film, he co-wrote and co-directed Scavenger Hunt. His short stories have appeared in various horror anthologies. In 2019 his short script Fertile Blood will be a part of the anthology horror film Slumber Party. He is currently working on his first novel A Dark and Secret Place set to be released in late 2019. Favorite Films: Taxi Driver, Fight Club, I Saw the Devil, The Wild Bunch, Dawn of the Dead, A Clockwork Orange, Pulp Fiction, Heathers, The Monster Squad, and High Fidelity.
The Game – The Fifth Season The Definitive Document Of The Dead