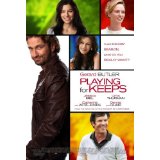 If you’ve been to a multiplex over the last few months, there’s a decent chance you’ve seen the one-sheet promoting Playing for Keeps accompanied by the tagline, “This Holiday Season, What Do You Really Want?” Let’s pretend we know absolutely nothing about this film, shall we? Gerard Butler occupies the biggest rectangle, so he’s clearly the star. Beyond that, your guess is as good as mine as to what this movie is actually about.

Is Butler a roguish gambler or marble player? Does his character have to decide if what he “really wants” is to sleep with Jessica Biel, Uma Thurman, Catherine Zeta-Jones or Dennis Quaid? My point is there’s little in the movie’s exceedingly generic poster and title that hints at the surprisingly warm, family-focused dramedy Playing for Keeps actually is.

Butler stars as “King” George Dryer, a Scottish former soccer star who has fallen on hard times. He currently lives in a nosy landlord’s (Iqbal Theba) guest house in Virginia so he can be close to his son Lewis (the impressively freckled Noah Lomax), who lives with George’s ex, Stacie (Jessica Biel). While trying to snag a gig as sports commentator and get back on his feet, George agrees to coach his son’s youth soccer team.

George’s rugged good looks and celebrity attract the attention of a pushy dad (Dennis Quaid). He also unsurprisingly catches the eye of soccer moms who run the gamut from sultry (Catherine Zeta-Jones) to emotionally needy (Uma Thurman and Judy Greer). The women throw themselves at George — though they do so in perfectly PG-13 ways — but he’s naturally carrying a torch for someone else entirely.

Given this set-up, there were a handful of different directions this movie could’ve gone. For example, I could see someone taking the same basic premise and making an R-rated raunchfest following George’s sexploits with the soccer moms. Someone else might’ve satirized the insanity and hyper-competitiveness of youth sports culture? Playing for Keeps actually dips its toes in both of those storytelling waters, but the filmmakers ultimately chose to make an adult coming-of-age tale with an emphasis on family drama. (Not surprising since director Gabriele Muccino also made the father/son-centric The Pursuit of Happyness.)

I realize a coming-of-age story usually involves a young person transitioning from childhood to adulthood, but that also describes George’s journey. He just happens to be already be a grown man.

After serving as the male lead opposite the Terrible Twosome of Romantic Comedies, Butler delivers the best performance I’ve seen among the more lighthearted entries on his resume. (Maybe he was relieved at not having to put on a bad American accent.) Although the actor has always been funny and charming off-camera, he seemed like an odd, too-forceful fit in straight-up comedies. Butler seems to relish the relative amount of extra meat in this role, since George has lost his mojo and is often either unsure of himself or just a screw-up. Butler’s star quality also makes him totally convincing as a famous former athlete — this is actually the second time this year I’ve reviewed his skills as a soccer player — and as someone women would throw themselves at, even if he’s a bit down in the dumps.

His scenes with Lomax are strong and steer clear of being cloying. (Lewis wants to worship the ground his dad walks on, but George makes it difficult.) Initially, Jessica Biel’s Stacie seems overly harsh toward her unreliable ex, but she and Butler develop decent chemistry after George finds out Stacie is going to marry a perfectly nice slice of white bread played by James Tupper. Some of George and Stacie’s scenes reminded me of a poor man’s version of Danny and Tess Ocean in Steven Soderbergh’s great Ocean’s Eleven remake.

Meanwhile, the rest of the overqualified supporting cast is tasked with providing the majority of the laughs in this dramedy. Greer, who should get a medal for being the second banana in so many romantic comedies, practically steals the movie as the neurotic, newly-single Barb. I also enjoyed the fact that Quaid inexplicably decided to play each scene as if his boorish Carl had just taken cocaine. On the other hand, Zeta-Jones’s cosmopolitan sex appeal appears to be on auto pilot, which is a shame because I think her Denise character had potential. (Like George, she used to have a prominent job and is seemingly slumming it in the suburbs.) At least she fared better than Thurman, who is totally wasted as Carl’s unstable wife Patti.

Playing for Keeps ends up being a somewhat uneven film with a prolonged final act. Though it certainly won’t win any Oscars (or even Golden Globes), it’s a perfectly pleasant holiday season offering that isn’t nearly as phoned-in as its packaging.