Posted in: The Reel World by Jeremy Butler on December 7th, 2012 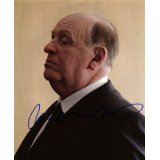 “They just want the same thing over and over again. They put me in a coffin…and now they’re nailing it shut.”

He has been regarded as “the master of suspense”, “the greatest British filmmaker”. He is Alfred Hitchcock; well, in this case, Anthony Hopkins portraying the infamous director. Set during the time of Hitchcock’s most notable and influential film, Psycho, the film walks you the through the entire process of the making of said movie without that boring documentary vibe typically found.

The year is 1959; Hitchcock (Hopkins) exits the premiere of his latest film, North by Northwest starring Cary Grant; on his arm is his wife and his most loyal supporter, Alma Reville (Mirren). The reporters outside rave about his genius, and he is relishing it until one question changes everything: Is it time to hang it up?

This question weighed heavily on Hitchcock; was he past his prime? He had become disillusioned in recent years, simply going through the motions when it came to his work; he needed something new and fresh, something that was going to return the spark to his work. It was then by either chance or fate that he came across the novel, Psycho by Robert Bloch, a novel loosely inspired by the crimes of notorious Wisconsin murderer and grave robber Ed Gein.

Hitchcock announces this as his next project and is met with an onslaught of resistance from the press and the studio, as well as the MPPC. Despite this, Hitchcock remained determined to make the film, opting to finance the film himself and risking everything; his house, his reputation, even his marriage on one roll of the dice.

All right, where should I even start? I suppose there is no better place than the beginning. Okay, this film possesses a great opening scene, a scene of true Hitchcock fashion (I’m not going to tell you anything about it because like the titular character, I like to leave people in suspense as well.). The film continues not to disappoint throughout, blending autobiographical details in a fashion that is guaranteed to keep everyone’s attention. Enough cannot be said about the witty dialo;, my hat is off to the screenwriter John J. McLaughlin. I had expected to possibly chuckle maybe once or twice during the movie, but presentation as well as the delivery of certain lines brought about more than I had anticipated.

Now on to the talents of Sir Anthony Hopkins. I never questioned that he would be good, but he was much more than that; capturing all Hitchcock’s minute mannerisms and the sophisticated way that he always held his head high. Hopkins performance is not to be overlooked, but he is not the only one that brought their “A” game. Scarlett Johansson and Jessica Biel, who portrayed Hitchcock leading ladies Janet Leigh and Vera Miles respectively, are not to be overlooked. Johansson shines as Hitchcock’s new leading lady, while Biel conveys vulnerability as Hitchcock’s former favorite who has fallen out of favor with the famed director due to a conflict about her career trajectory. Both ladies are very good; however, the scene-stealer of the film would have to be the woman playing Hitchcock’s original lady, Helen Mirren. Mirren dominates throughout the film, but the point where she really captured my heart was during her monologue where she makes it very clear to Hitchcock himself that she is quite more than just his wife.

On to the story: extremely well done; it’s rare to find a film that makes the best use of its allotted time. There were several different plot points, all going at once, and they are tied together beautifully. If you wish to know what they are, you’ll have to see the movie for yourself (my love of suspense, remember). Well, it would seem the only proper way to end this would be in the same fashion as the film, so in the words of the great Alfred Hitchcock, “Good Evening.”

Jeremy Butler is a film school graduate of the International Academy of Design and Technology. He is been writing for Upcomingdiscs since 2012; however, movies have played a big part of his life for much longer. Favorite genres include horror, science fiction/fantasy, and comedy. Favorite movies are V for Vendetta, Boondocks Saints, Kiss Kiss Bang Bang, and The Godfather.
Playing for Keeps Lady Antebellum: Own the Night World Tour (Blu-ray)