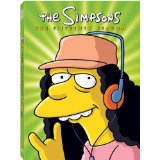 The head of the Simpson family is father Homer (Castellaneta). Homer’s pretty much a moron who happens to run a control panel at the local nuclear power plant. There’s nothing he wouldn’t do for a donut or a Duff’s beer. He happily meanders into the most outrageous situations with really no control over his family at all. Mother Marge (Kavner) loves her family but is usually frustrated by Homer’s mess-ups. She’s the smart one who manages to keep the family together. Son Bart (Cartwright) is a teenage bad boy on a skateboard. Whatever prank there is, he’s played it. He’s lazy and will go to great lengths to get out of work. Daughter Lisa (Smith) must have been adopted, but wasn’t, much to her own disappointment. She’s bright, hard-working, and talented. Too bad she ends up thwarted most of the time by her father or brother. There’s baby Maggie to wind up the family. Homer likes to hang with his friends at Harry’s Bar, where he can relax with a Duff in his natural element. The town of Springfield is populated with all sorts of colorful characters who often weave their lives intricately into the lives of the Simpson clan. Of course, this isn’t news to any of you. Love them, hate them, or indifferent, everyone knows The Simpsons.

There are also some classic episodes to contend with in this release: Of course it all starts with yet another Treehouse Of Horror episode. In this one Homer kills death when he comes for Bart. The result is a world where no one can die. The episode also contains a Frankenstein spoof where Homer gets a call intended for the mad scientist Dr. Fink. The result of this one is a madcap reanimated corpse on the loose in Switzerland. Finally the Treehouse episode finds Bart and Milhouse with a watch that can stop time. It’s all fun and games until the watch gets broken and everything is standing still except for them. These episodes are always the highlight of any season.

Other highlights include The President Wore Pearls. Homer wins $200,000 at a school Vegas Night charity event and doesn’t understand he hasn’t won real money. The family visits London in The Regina Monologues. In Fraudcast News, Homer removes a bush from the town’s landmark Geyser Rock and causes a landslide on Springfield. The Way We Weren’t finds Lisa as Judge in a Simpson’s family court. We get to see Marge and Homer in their high school days. My Big Fat Geek Wedding finds Principal Skinner getting married to Edna, and the bachelor and bachelorette parties get out of hand. Homer finds out Skinner is getting cold feet. Matt Groening even takes a guest voice here.

We reviewed the DVD set, and I have to tell you that after being spoiled on Blu-ray these look pretty bad on DVD. The discs contain some deleted scenes, sketch galleries, animation showcases, and a few retrospective shorts. Hopefully, we’ll get to tell you about future seasons on Blu-ray again. Unfortunately, not today. “I’m getting me a real spleen and then I’m gonna vent it on you.”

Gino Sassani is a member of the Southeastern Film Critic's Association (SEFCA). He is a film and television critic based in Tampa, Florida. He's also the Senior Editor here at Upcomingdiscs. Gino started reviewing films in the early 1990's as a segment of his local television show Focus. He's an award-winning recording artist for Omega Records. Gino is currently working on his 8th album Merchants & Mercenaries. Gino took over Upcomingdiscs Dec 1, 2008. He works out of a home theater he calls The Reel World. Favorite films: The Godfather, The Godfather Part II, The Body Snatcher (Val Lewton film with Karloff and Lugosi, not the pod people film), Unforgiven, Gladiator, The Lion King, Jaws, Son Of Frankenstein, The Good, The Bad And The Ugly, and Monsters, Inc.
Duck Dynasty: Season 1 Finding Nemo (Blu-ray)