Posted in: No Huddle by Brent Lorentson on December 11th, 2012 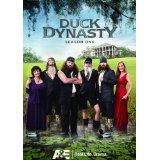 “Meet the Robertsons clan. They turned duck calls into a multi-million dollar empire.  But running a family business is tough when the family just wants to run wild.”

I have to admit when I got handed this to review my expectations were not just low, but part of me just wasn’t looking forward to this.  I’m just not a fan of reality television with the exception of every ghost hunting show out there.  I have no shame in admitting I want to believe. So a show about good ol’ boys that are millionaires for making duck calls, it simply sounded painful.  But by the time I got a couple episodes in, I couldn’t believe it; I was actually looking forward to what shenanigans the Robertsons were going to get into next.

Season one contains fifteen episodes that follows the Robertson family who built up Duck Commander, a family-run business that specializes in the creation and distribution of duck calls.  Running the family business is Willie, and to look at him it’s hard to believe he’s the college graduate with the business degree running this million dollar operation, but it’s his look that helps sell the product.  What respectable hunter would buy a duck caller from a clean-shaven; spray-tanned man in a business suit?

The most fun I had with the show was following Willie’s brother Jase and Uncle Si.  These guys are a reality TV gold and are what will keep me watching as the seasons follow.  What’s so great about them you may ask; well, for starters, Jase brings the right amount of conflict with Willie whether it’s Jase trying to play manager for the day or stealing Willie’s prized RV to pick up some ATV’s, Jase seems to always keep his brother on his toes.  As for uncle Si, to call him the crazy uncle is an understatement, whether it’s the random “hey” catchphrase, his recollections of Vietnam while talking to kids on career day, or how excited he gets with frog hunting, he manages to always say or do the unexpected.

An issue I have with the show, the same issue I have with numerous so called “reality” shows, is the lack of realism.  Each episode has its conflict/resolution plot where at the end something is learned that helps everyone be a better person in the end.  This is evident with each episode ending with the whole family together praying before digging into their fresh home-cooked meal.  I don’t have a problem with a show delivering a positive message, especially in a time when it’s getting harder to find shows that have positive values for the whole family, but when it’s done in the world of reality TV, it just comes out forced and disingenuous.

But the show isn’t trying to change the world and it is entertaining.  In Frog In One, when Jase convinces Willie to skip out of going to school to speak at career day and has his  dad Phil (he founded Duck Commander) and Uncle Si go in his place, scripted or not, this turned out priceless.  Just seeing the kids’ reactions to seeing a bird being gutted, or hearing the violent recollections of Vietnam, isn’t all we get.  Things get more outrageous when Jase decides to get together a crew for a frog hunt at the golf course which goes horribly wrong.  It’s something you’d expect from a goofy screwball comedy, not a reality show.

In Daddy’s Got a Gun, Willie discovers his daughter has a boyfriend, and he’s not too happy to hear this young suitor plans to take his daughter to a dance.  Willie decides what better way to meet and get to know the boy than to take him out snake hunting, bringing Jase along for the ride.  For any guy meeting a girl’s father is a scary situation; now imagine being out in the middle of the woods with shotguns and poisonous snakes.  How does he fare?  Well, you’ll have to check it out, but I can promise it is entertaining, especially with Jase constantly reminding his brother that at the dance most likely kissing will be involved.

What helps anchor the show and its colorful male characters are the charming southern women that inhabit their lives.  Miss Kay, throughout we see in the kitchen, and no matter how out of hand the men might get, she always manages to keep them in line and remind them about what counts.

As I try to wind this up, the one thing that stuck with me for the show that even as an animal lover and hating to see any animals get killed…seeing how riled up they guys get when they encounter beavers.  I’m sure PETA disproves of the show, but it is hilarious seeing the lengths the family will go to to wage war against these furry creatures.  Guns, smoke, and homemade bombs are just some of the tricks they have up their sleeves when engaged in battle against their furry adversaries.

Overall I can’t say this is groundbreaking television, but for what it is I had a good time with it, and it was never boring, which is always a good thing.  Sure, a lot of this is staged, but considering most of the time the guys are moving through the woods with guns and explosives, perhaps a little staging in the name of safety is a good thing.  But for those that are tired of the reality shows that seem to thrive off characters simply fighting or bed hopping, Duck Dynasty is a breath of fresh air.

Brent Lorentson is a horror writer and film critic based out of Tampa, Florida. With a BA in Digital Film, he co-wrote and co-directed Scavenger Hunt. His short stories have appeared in various horror anthologies. In 2019 his short script Fertile Blood will be a part of the anthology horror film Slumber Party. He is currently working on his first novel A Dark and Secret Place set to be released in late 2019. Favorite Films: Taxi Driver, Fight Club, I Saw the Devil, The Wild Bunch, Dawn of the Dead, A Clockwork Orange, Pulp Fiction, Heathers, The Monster Squad, and High Fidelity.
Kaijudo – Rise of the Duel Masters: Creatures Unleashed Simpsons: Season 15