Posted in: No Huddle by Brent Lorentson on December 13th, 2012 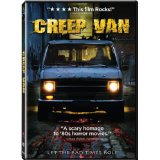 Who doesn’t get a little creeped out any time they see an old van cruising slowly through their neighborhood?  Now, I’m not talking about the soccer mom mini-van you see plenty of, but I’m talking about those vans from the 80s and beyond that seemed to be the vehicle of choice in films where kidnapping is involved.  Creep Van takes the idea of the sleazy van and uses it to its fullest, transforming this white metal beast into the ultimate death trap on wheels.  Unfortunately the van and the gore are pretty much all the film has going for it.

Cambell (Brian Kolodziej) is a little down on his luck; with a new job working at a car wash and having to take the bus, things are far from easy.  To make matters worse, his living situation isn’t much better with a roommate with a few fetishes and the roommate’s girlfriend who has an unexplained hatred for Cambell and enjoys kicking him down when she gets the chance.  Just about the only good thing going for Cambell is his cute co-worker Amy (Amy Wehrell).  Things begin to look all the more promising after Cambell comes across a white van that’s for sale and in his price range.

Doing all he can to get a hold of the van’s owner proves to be a time-consuming task; when Cambell finally gets a hold of the owner, it turns out he’s in the middle of killing another perspective buyer.  Things get odd as the vans owner starts calling Cambell and his friends delivering threats and does his best trying to be creepy, but the audience never gets to hear his voice clearly, which took away any potential menace this character could have had.

As the film plods along, any time it seems like the story at the car wash is getting a little boring the driver in the van kills someone.  The killer doesn’t seem to have a motivation behind the killings or any pattern to the violence; it seems whoever comes along becomes the next victim.  There are some nifty kills at least, one severing a would be thief in half and then my favorite kill of the film where the van’s victim has their face cut off.  Sadly these were the highlights of the film.

By the time the final showdown between Cambell and the killer occurs, the film has already reached a level of absurdity that it simply became impossible to understand why anything is occurring.  How a new age hippie drug dealer gets involved in this and becomes Cambells go to man for backup rather than calling the police is just one of the many bad decisions that made this a cringe-worthy experience.

Aside from a cameo by Lloyd Kaufman (writer/director for Troma films) the acting is a little below standard for what you’d find in your average B-movie romp.  But the blame goes to the writing; perhaps if there was more to the history of the van and the killer’s motivation the viewer could invest themselves more so into the film.  At the end of the day this is simply the cheesy B movie you would expect from a film called Creep Van.  Troma fans may be able to find some love for this turkey, but for me this van is one I’d let pass me by.

Brent Lorentson is a horror writer and film critic based out of Tampa, Florida. With a BA in Digital Film, he co-wrote and co-directed Scavenger Hunt. His short stories have appeared in various horror anthologies. In 2019 his short script Fertile Blood will be a part of the anthology horror film Slumber Party. He is currently working on his first novel A Dark and Secret Place set to be released in late 2019. Favorite Films: Taxi Driver, Fight Club, I Saw the Devil, The Wild Bunch, Dawn of the Dead, A Clockwork Orange, Pulp Fiction, Heathers, The Monster Squad, and High Fidelity.
Dick Tracy (Blu-ray) Holiday Gift Guide – Spotlight: Star Trek The Next Generation: Season 2 (Blu-ray)