Posted in: No Huddle by Brent Lorentson on December 21st, 2012 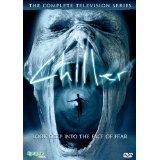 This short-lived UK television series from 1995 is something I had never heard of, and after watching it, I consider it one of the best horror anthologies produced.  Tales from the Crypt, The Twilight Zone, The Outer Limits all hold their own place in what they brought to the small screen, each with episodes that are given the same reverence we would give a classic film.  What Chiller managed in five episodes left me wanting so much more; five episodes simply was not enough.

Prophecy: When a group of friends get together for some drinks and a séance, you just know things are not going to go as planned.  During the séance a prophecy is given that seems vague and nothing for the friends to worry about, that is until five years later when the friends begin to die off one by one. Though the story seems familiar, it remains fresh by adding a young boy who has a gift/curse where is able to see how people will die.  As the first of the stories, it sets up the tone nicely for the other tales to follow.

Toby: This story was one of my favorites about a pregnant woman who gets into a car accident and as a result loses the baby; the problem is her body is still going through the changes that come with a pregnancy.  This story creeped the hell out of me, and if I were a woman this would terrify me all the more; the thought of having a ghost baby growing inside is simply a horrible thought.  But the story doesn’t stop there as she even gives birth to this ghost child, though the doctors and her husband all believe she’s just gone mad.

I enjoyed everything about this story, the direction, the writing, the acting are all spot-on for this story of a haunting or perhaps a woman simply going mad after the loss of her baby.  This would play well as a double feature with the great 80’s classic The Entity.

Here Comes the Mirror Man:  A social worker sets out to help a homeless man, Gary Kingston, who has made himself a home in a dilapidated church.  She wants to help him and Gary wants to be helped; only one thing is stopping him, Michael, a manifestation created from a mental illness.  Michael knows if Gary gets help he will cease to exist, so he does all that he can to convince Gary to kill the social worker and anyone who comes between them.  Though I enjoyed the idea, this for me was the weakest of the stories.

The Man Who Didn’t Believe In Ghosts:  Richard Cramer makes a living trying to convince the world ghosts do not exist.  Unfortunately the new home he and his family have moved into just happens to be haunted.  He does his best to find reasonable answers for the strange events occurring in his home and to his family, but in time he begins to question even his own beliefs.

Watching Richard struggle with his beliefs and trying to support his family is what drives this installment.  His self doubt and his struggle to write his new book only drives him to drink more, which only seems to cloud his judgment.

There are some nice little jump scares in this one, but unfortunately as the story finds its resolution I was left a little underwhelmed; overall I still enjoyed this story.

Number Six: For two years a killer has stalked the children of the small town of Helsby. On the night of the next full moon the police are well aware that their killer is going to strike again; unfortunately, they don’t have a clue as to who is behind all the murders.  The town is on edge and doing all that they can to look out for their loved ones, but the town knows with certainty no child is too safe.

The direction this story goes is simply creepy.  It seems the children of the town know what is to be expected, and through a Druid practice they choose who will be the child to be sacrificed.  Seeing the kids on the playground, when teachers simply view it as nothing more than a children’s game, makes it all the more haunting.  And when the child is chosen to be the sixth victim, we can’t help but hope for the best or wish the children would simply pick another.

I loved this story.  Sure there are nods to The Wicker Man and many other stories and films of this nature, but what made this work is that the short running time cuts all the fat we would find in a full length film.  From the very start of this story the mood is set; we meet our characters and genuinely get attached to them.

Though this was only a 5-story anthology and only lasted a season, I hold Chiller up in the same echelon with the other great horror anthologies that have existed over the years.  Will my favorite be yours?  Who’s to say; we all have our own tastes, but I’m fairly certain those who give this series a chance will be more than satisfied, and like me will wish there were more to come.

Brent Lorentson is a horror writer and film critic based out of Tampa, Florida. With a BA in Digital Film, he co-wrote and co-directed Scavenger Hunt. His short stories have appeared in various horror anthologies. In 2019 his short script Fertile Blood will be a part of the anthology horror film Slumber Party. He is currently working on his first novel A Dark and Secret Place set to be released in late 2019. Favorite Films: Taxi Driver, Fight Club, I Saw the Devil, The Wild Bunch, Dawn of the Dead, A Clockwork Orange, Pulp Fiction, Heathers, The Monster Squad, and High Fidelity.
Tosh.O – Deep V’s Californication: The Fifth Season