Posted in: Disc Reviews by William O'Donnell on December 19th, 2012 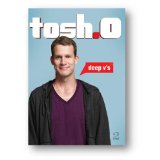 The debut season of this Comedy Central program was entitled “Hoodies” on it’s DVD and Blu Ray release. Season 2 is called “Deep V’s” in honour of the garment Daniel Tosh, the host, wears in each episode. Very little is different as far as format or new segments are concernced since the last time I wrote about this show (http://upcomingdiscs.com/2012/06/05/tosh-o-hoodies-blu-ray/). To avoid redundancy I shall simply add to that review with a couple new relevant points for this season.

YouTube had all but killed off the idea of mailing silly home videos to the likes of America’s Funniest Home Videos. These days, people prefer to stream dozens of videos on their computers and save themselves from the watered down jokes of Bob Saget or current host Tom Bergeron. Tosh.O takes a similar format of displaying such silly videos, but focuses on things that have gone “viral” online. Like AFHV, Tosh.O adds their own commentary and sketches to the presentation but in a much more crass, cable-savvy manner.

Daniel Tosh makes for a very suitable host, which makes the difference to those who may consider aimlessly surfing through YouTube’s channels to be a more valuable way of taking in the latest in mind-numbing entertainment. Tosh not only is capable at delivering edgy quips but often places himself at the butt of self-deprecating and/or harmful sketches where he may partake in the same idiocy he seems to be lambasting at other points in the episodes. There are some moments here and there where his tangents get a bit self-indulgent when he starts making very specific references to celebrities and athletes. If you aren’t familiar with the person he is speaking about, the jokes are a bit flat and kill the show’s momentum.

This season Tosh truly tests the limit of how far he can go with bad taste. The “Is it Racist?” segment is still around, which is geared to attack others for making racist jokes, but that doesn’t disarm Tosh’s own politically incorrect comments; which there are a ton of. Daniel Tosh was at the forefront of the debate about whether rape jokes should be told or if they’re funny, and Tosh.0 has offered him another forum to test what other subjects can or cannot be joked about.

One of the most intriguing recurring sketches is “Web Redemption” where they track down the star (or victim) of a popular clip and give them the opportunity to explain said clip as well as recreate the situation in order to avoid their popular blunder (these clips often have views calculated in the multiples millions). It is often all too clear that these people are famous for an accident, and not their charm or skill. Every once and a while though, a truly charming, or even surprising individual comes along and you can’t help but smile as their 15 minutes of internet fame transfers to a little slice of television too. This season they have added a small amount of celebrity cameos to these, such as Josh Homme of Queens of the Stone Age helping to perform an acoustic rendition of “What what, in the butt.

Widescreen 1.78:1. The transfer to Blu Ray is nicer looking than it was in the first season, but HD clarity is still the enemy of a show that uses 100% green screen for a set. The background (as digitally inserted as it is) can look a bit cheap.

All of the features are in one, wordless menu as they are all essentially extended scenes. The Blu Ray box labels some independently so I shall cover them similarly here:

The Uncut 24-minute Human Centipede Spoiler: This is an episode long rant by Tosh where he describes his experience watching this horror film. He spoils the entire thing and tells jokes all along the way. It’s like hanging out with a funny buddy while you rip on a bad film…except you don’t get to join in. Like MST3K without the movie actually playing.

Extended Redemption Interviews: Tosh asks a lot of questions, many of them are rhetorical jokes that get laughter instead of a worthwhile response.

“If Daniel Fought Celebrities” – Extended: A longer version of when Tosh had members of the audience yell celebrity names and he’d answer whether he could beat them up or not. Spoiler…he loses most of those.

If you’ve got a personal vendetta against time, then this show is the ultimate in killing it as it can be eerily addictive. If your friends catch you watching it, you’re either in for a cavalcade of rolled eyes…or a heck of a lot of fun sharing.

Trouble With the Curve (Blu-ray) Chiller – The Complete Television Series