Posted in: No Huddle by Jeremy Butler on December 21st, 2012 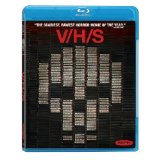 Yes, the found footage technique: the first person narrative technique designed to give the audience the impression of the film being pieced together from a series of video recordings usually left behind by characters now believed dead. The technique existed before but became internationally popular when the film The Blair Witch Project was released. In recent years, the technique has been used more and more with such films Paranormal Activity and Chronicle; these are examples of when the found footage technique works; well, you can add V/H/S to that list.

Split up into six different stories, the film reminded me of summer camp when you sit around the campfire at night and tell ghost stories (these stories have much more blood and gore than the stories my friends used to tell, of course).  Six stories and nine directors (I know it’s a disproportionate amount of directors, but Radio Silence is actually a four-man team), think of it as a video collection of horror tales, and trust me, you will be scared.

Tape 56 directed by Adam Wingard: This tale acts as the main story arc leading in to all the other individual tales. It follows a group of vandals who each videotape their exploits and sell them on the internet. After accepting an offer over the internet, the group breaks into a stranger’s home in search of a mysterious VHS tape, completely unaware of the carnage that awaits them.

Amateur Night by David Bruckner: A cautionary tale about the dangers of picking up strange women in bars. A trio of friends hit the town with the express goal of meeting women and bringing them back to their hotel room for a session of drunken sex and involuntary filming. They pay for this lesson in blood.

Second Honeymoon by Ti West: A married couple takes a road trip out west as a second honeymoon. They are young and they appear happy; the trip starts off right, but before long things take a turn. Quite a surprise ending; I didn’t see it coming.

Tuesday the 17th by Glenn McQuaid: Wendy and three of her friends venture to her hometown, simply planning on hiking and partaking of certain herbal activities. What the three friends are unaware of is that years earlier Wendy was the sole survivor of a murderous rampage carried out by a killer she claimed had supernatural abilities, and the entire trip is a ruse to lure the killer for Wendy to exact her vengeance.

The Sick Thing That Happened to Emily When She was Younger by Joe Swanberg: A bit of a long title, I know, but it a worthwhile tale. The entire sequence is carried via web chatting between Emily and her long-distance boyfriend, James. After finding a strange bump under her arm and constantly hearing strange noises in the middle of the night, Emily begins to believe that her apartment may be haunted. James, on the other hand, believes the entire thing is in her head. After days of investigating, Emily has her concrete proof, but a startling revelation reveals more to the story (my personal favorite of the six).

10/31/98 by Radio Silence: The final tale in the ensemble. This story takes place on Halloween; four buddies head out to a Halloween party they heard about through the grapevine. They arrive at the house and discover it empty. Instead of leaving (like normal people would), they have a look around and inadvertently witness an exorcism of a young woman. Believing the woman to be in danger, they intervene. Not a good idea.

I found all of the tales to be intriguing and original, each one worthy of the title horror story; each has blood, gore, all of the prerequisites. However if I was to put them in order of my favorite to least favorite, it would goes as so: The Sick Thing That Happened to Emily When She was Younger, Second Honeymoon, 10/31/98, Amateur Night, Tuesday the 17th, and Tape 56.

I love twist endings that take you by surprise, and that’s why the Emily and Honeymoon stories have my top two slots, because that what they delivered. Disclaimer: This film is not for the faint of heart, and if you have bladder control issues, do not watch in the dark.

Jeremy Butler is a film school graduate of the International Academy of Design and Technology. He is been writing for Upcomingdiscs since 2012; however, movies have played a big part of his life for much longer. Favorite genres include horror, science fiction/fantasy, and comedy. Favorite movies are V for Vendetta, Boondocks Saints, Kiss Kiss Bang Bang, and The Godfather.
Californication: The Fifth Season Jack Reacher