Posted in: The Reel World by Gino Sassani on December 21st, 2012 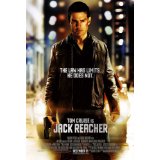 It’s pretty much a straightforward thriller film. It starts with a scene that is going to draw more attention than it might have if not for the horrible events at Sandy Hook Elementary. We’re all a little sensitive to this kind of scene. Some are going to be more so than others. Still, this film follows a sniper as he carefully preps his equipment and takes his position. Than we linger through his scope as he hunts for his targets and eventually takes them out. It’s a very effective scene even without the current events. Unfortunately, it won’t carry the same effect it would have just a few weeks earlier. It’s a startling scene that will certainly leave an impact. If you are in that high level of sensitivity right now, it’s honestly best that you avoid this one, at least for now.

There’s a franchise here, to be sure. If you’re a little tired of the usual conventions and clichés, “There’s a Jack Reacher here to see you”.

Gino Sassani is a member of the Southeastern Film Critic's Association (SEFCA). He is a film and television critic based in Tampa, Florida. He's also the Senior Editor here at Upcomingdiscs. Gino started reviewing films in the early 1990's as a segment of his local television show Focus. He's an award-winning recording artist for Omega Records. Gino is currently working on his 8th album Merchants & Mercenaries. Gino took over Upcomingdiscs Dec 1, 2008. He works out of a home theater he calls The Reel World. Favorite films: The Godfather, The Godfather Part II, The Body Snatcher (Val Lewton film with Karloff and Lugosi, not the pod people film), Unforgiven, Gladiator, The Lion King, Jaws, Son Of Frankenstein, The Good, The Bad And The Ugly, and Monsters, Inc.
V/H/S (Blu-ray) Halo 4: Forward Unto Dawn (Blu-Ray)