Posted in: Disc Reviews by Michael Durr on December 23rd, 2012 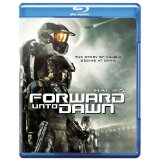 No matter how bad video game adaptations into movies are, I enjoy the grand majority of them. From the really good ones like Silent Hill and Mortal Kombat (minus the sequels) to the dismal ones like Double Dragon and Super Mario Bros. Each of them has their subtle charm and some thoughtful fan service (unless it is a game film directed by Uwe Boll). Today, we have something a little different, a game film that its sole purpose is to promote the upcoming game. Enter the film : Halo 4 – Foreword Unto Dawn.

As the film opens, we are introduced to the officer cadets at the prestigious Corbulo Academy of Military Sciences. We have the main character, Thomas Lasky (played by Tom Green) who is finding it hard to live up to his family’s military history. Cadet Michael “Sully” Sullivan (played by Masam Holden) likes to crack into places where he does not belong. Cadet Walter Vickers (played by Iain Belcher) was born for this as his father produces military weapons.

Cadet April Orenski (played by Enisha Brewster) is the senior member of the unit and has always been destined to lead. Junjie Chen (played by Osric Chau) also has high standards and honor to live by in his sacred family. Then we have a pair of shapely females to finish up the team in the English lass, Chyler Silva (played by Anna Popplewell) and Dimah Tchakova (played by Kat De Lieva) who will use her family’s influence to make sure she gets her rightful spot in this unit.

The credits roll as we watch a strange scene where we hear the voice of Cortana (voiced by Jen Taylor) talk about four long years where all she’s had is time to think. As we shift to a ship out in space, we watch as a Commander (played by Ty Olsson) listens to a mayday message and decides his next course of action. As time shifts, we join up again with the cadet squad as they emerge from cryo-sleep and their pods open. Each of the cadets wretch (especially Lasky) as they huddle up and plan their mission.

Upon walking into the bright sun, the cadets immediately come under heavy fire. Sully goes down almost immediately and Lasky wants to help but is urged by others to proceed forward. They find a bunker to plan their next move. It appears that they are getting flanked by the enemy and Vickers acting as leader wants to set his own course of action. Lasky wants his own plan but Vickers calls up his rank and refuses to go along with it. Lasky decides to go against the grain and proceed directly into battle. The next thing he knows he finds himself pulverized on the ground.

Thankfully, this was just an exercise. However, the Hastati squad did actually lose and it was all because of the actions of Lasky. General Black (played by Mike Dopud)talks down to the group and talks about the proud Corbulo commander whose name sake heads the Academy. In turn, later in the locker room, Lasky is again verbally accosted by the majority of the teammates for his actions. Even later, lead officer Orenski and the rest of the team minus Sully and Silva publicly shun him. It is about the same time that Lasky is called to the office of Mehaffey (played by Ayelet Zurer).

Mehaffey is a senior officer and does not offer any kinder words for him either. She dismisses him after some family talk and he goes off to see Dr. Hughes (played by Chris Shields) who is concerned about some scars on his back which might be a strange reaction due to cryo-sleep. Back at the sleeping quarters, he watches videos of his brother, Cadmon (played by Max Carver). Lasky goes to sleep as the lights go out in the academy. He thinks about his next move but little does he know things are about to change.

Halo 4: Forward Unto Dawn is not really a story about Master Chief (who will show up later) or even about the Hastati squad, it is the story of Thomas Lasky. From humble beginnings he morphs into the character that Halo fans will know about him today. But except for a few curious flashes of being a great leader, he spends more of his time bumbling around and fans will struggle to understand how exactly he comes to be even when he has big moment. But there are other issues too in this series.

The film plays out as something akin to a horror film. People are dying left and right and until a certain person saves the day, I was pretty convinced everybody was going down in a blaze of glory. I do not mind it being grim honestly, but the film should played out a little closer to the genre that Halo games typically emulate. It reminds me quite a bit of Starship Troopers without the political satire (which is why the sequels never quite worked either). There is no humor, no depth and at the end of the day, at least this viewer is glad that it is over and done with.

It is also incredibly cheesy. I am not sure if it was planned or came out unintentionally but after building a very dark and grim world in the academy, they tear it down with the inclusion of Master Chief (played by Daniel Cudmore). As soon as he shouts, “I am Master Chief”, I couldn’t do anything else but snicker and mock it for all it was worth. The only thing he did not do was ride in on a white horse to save the day. Based on the way Halo 4 plays out, I understand it had to be done but couldn’t he have been a little less cartoon characterish?

The video is in 2:35 widescreen presentation in 1080P. The series was initially a series of web videos that were then put together for home video production to promote the Xbox 360 game. But if I did not read that in my research, I would have never known. The film actually looks quite good and even though they had to cut a few corners (10 million dollar budget), they make excellent use of the set pieces they have. Great color, great detail and a few wonderful special effects that really compliment the action around them. The only thing I was perhaps not happy with was their depiction of the Academy space needle or some of the outside scenes, but that’s mostly nitpicking.

For the audio portion, we get a 5.1 DTS-HD track in English (2.0 Mix also provided). I have to admit, this is one of the best uses of DTS-HD sound I have ever heard. The dialog is crystal clear despite the amount of accents and dialect differences on display. Furthermore, when it breaks into the action sequences, the sound effects are perfect and the use of surrounds are absolutely spectacular. Here is the most important part, never for a moment do you lose the dialog and never does one stop enjoying the amazing sounds around them in every speaker that is available. English subtitles are provided.

Halo 4: Forward Unto Dawn is not the film that every Halo geek has wanted since they first lifted their needle guns towards their foe in hope of scoring a kill. However, it will be heralded by most fans as worthy of living up the their sacred franchise. Unfortunately, I found it too cheesy and the film becomes very jarring when one minute it is borderline horror and the next Master Chief comes in and saves the day. But thankfully, there is some good character development even if it looks like casting had a score card of all major minority groups and gender types.

The disc on the other hand is fantastic. The video is spot on and the audio is right up there with other huge budget action franchises as reference quality. The amount of extras is also sure to delight any Halo fan looking for extra information on how they made the film. My recommendation is also down the middle for this film. Fans of the franchise really do not need my stamp of approval, they will like it, I’m sure. Casual fans of the genre or video games might leave a bit disappointed from this film, but there are some good spots. I think most people in the end will stick with the game and less with the back story. Enjoy.

Michael Durr has been reviewing movies for the better part of fifteen years now. He primarily enjoys thrillers, sci-fi, animation and even a little courtroom drama. His favorite films include Escape from New York, the Goonies and anything with Alyssa Milano. When he’s not praising Kurt Russell as the greatest actor of our time or scratching his head over a David Lynch flick, he’s spending time at home in Texas with his lovely wife, Lori and his amazing son. How they put up with him is a mystery, but even Basil Rathbone doesn’t have the time to solve that one.
Jack Reacher House of Lies: Season One