Posted in: No Huddle by Brent Lorentson on December 27th, 2012 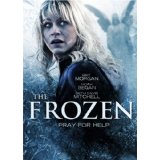 The idea of traveling out into the middle of nowhere, surrounded by snow and with no running water or toilet around, is not my idea of a nice vacation.  In fact, being a former Eagle Scout, just hearing about camping is enough to recall nights of sleeping on the hard ground, in the cold with rocks and sticks being stabbed into my back while trying to sleep.  It’s not that I hate the outdoors; I’ve simply grown to appreciate the niceties of life, and if getting in touch with nature means mosquito bites, I’ll stick with the motel 8 and enjoy the view from my room.  This being said, when I see a film like The Frozen where a couple from the city decides to go camping, in the middle of nowhere and in the snow no less, I already suspect this cannot possibly end well.

When we first meet Emma (Brit Morgan), she’s locked away in the bathroom waiting for the results of a pregnancy test to come through.  At this point when she discovers she is pregnant, she should have put a stop to this insane trip; with one responsible decision she could have prevented the entire horrible mess that awaits her, but alas, had she been wise, we never would have had much of a film to watch.  Her long time boyfriend, Mike (Seth David Mitchell), has been planning this special trip for some time and has picked this frozen tundra over the warm sun, where Emma had hoped their vacation would be.  But Emma knows how much this trip means to Mike, so she swallows all common sense, and the two set out for their adventure.

More red flags are set off as we learn Mike has rented a snowmobile which he is using for the first time, and they need to travel the twenty-odd miles to where they plan to set up camp.  Still the pregnant woman seems to be fine with this as they speed across the snow covered ground, marking their path so they know the route to take for their return.

Everything is about as standard as it gets at this point; the camera, sound, and performances are about what you would expect for this low-budget indie.  It’s the scenery that helps add atmosphere to the film.  All the snow and absence of life around them creates a sense of dread with the isolation.

It’s after Mike loses control of the snowmobile causing them to wreck that the film seems to start going somewhere.  The two are lucky enough to survive without injury, but unfortunately the snowmobile is totaled.  As Mike does his best to repair the snowmobile, Emma stays back at the camp where she begins to have nightmares, mostly concerning seeing people who are in the woods with them.  As her nightmares intensify it becomes harder and harder to follow what is real and what is simply a dream.  This grows more complicated as both Mike and Emma begin to see a hunter who seems to be stalking them, though when they try to go to him for help he seems to vanish.

Once Mike vanishes after trying to confront the hunter, the pace starts to pick up somewhat, but then for no reason Emma decides that instead of running for help or doing anything at all, she will stay in her tent to sleep her troubles away.  Of course more sleeping leads to more crazy dreams and dreams within dreams where we are left to wonder is she going crazy or is there something more mysterious going on in the frozen woods?  The answer when given is a bit obvious, yet still satisfying.  Some of the twists going on towards the end feel unnecessary when we finally reach the end.   Had some of the twists been pursued earlier in the film, I believe a more complex story could have been delivered and given the end more bite.  I wouldn’t say this is bad by any means, but I doubt this is a title I’ll remember much from a week from now.

Brent Lorentson is a horror writer and film critic based out of Tampa, Florida. With a BA in Digital Film, he co-wrote and co-directed Scavenger Hunt. His short stories have appeared in various horror anthologies. In 2019 his short script Fertile Blood will be a part of the anthology horror film Slumber Party. He is currently working on his first novel A Dark and Secret Place set to be released in late 2019. Favorite Films: Taxi Driver, Fight Club, I Saw the Devil, The Wild Bunch, Dawn of the Dead, A Clockwork Orange, Pulp Fiction, Heathers, The Monster Squad, and High Fidelity.
For One Night 12 Days Of Christmas Giveaways – Day 3: NBA2K13 For PS3 From 2K Sports