Posted in: Disc Reviews by William O'Donnell on December 27th, 2012 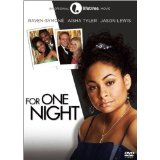 An African American high school student fights against her school’s longstanding decision to host racially segregated proms. This film is based on true events that occurred at a school in Butler, Georgia. Originally debuting on the Lifetime network in 2006, this is the film’s first DVD release.

A couple of the actors seemed a little out of place in their roles. Jason Lewis’ beauty is a bit of a curse as he is seems only suited to play male models. As a high school teacher, his hair is just a bit too gelled and his chin seems a bit too molded. This may seem like an unfair evaluation but sometimes I think the casting director needs to be more aware of whether or not an actor looks right for the part and Mr. Lewis just didn’t have the mien of “small Southern town.” I don’t even recall if he had the correct accent come to think of it…

The other person whom I felt was a little ill-suiting e in their role was Raven-Symone. I’m not saying that she was bad in her first dramatic role. Raven did well enough in the parts where her character needed to appear passionate about her cause, but she looked uncomfortable in the parts where she was simply appearing as a high school cheerleader. A bit of this could be due to the sometimes awkward scene changes where things start off very stiffly before the dialogue begins, and Raven is often the featured character in these scenes.

I’ve ragged on Lifetime before (as many have made a habit of doing so) and so I’ll avoid summarizing this review sound with a “what did you expect?” sort of statement. The story is certainly one worth telling and overall this film does a decent job of it. There are some corny romantic subplots involved but the core message of equality still gets hammered home.

Widescreen 1.78:1. Nothing spectacular but certainly acceptable when it comes to films that were made for television.

Dolby Digital Stereo. The audio feels a bit flat at times and things aren’t always mixed as well as they could possibly be. There are no overly distracting errors or anything like that, but obviously not a ton of effort went into the audio production here.

The real-life student did a valiant thing by swaying her school to change their racist policy (at least for one evening), and her story did deserve to be told on a larger scale than the news. This film honours that decently.

Mankind: The Story of All of Us (Blu-ray) Frozen