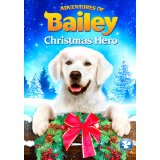 Baby here again. Yeah, I’m that German Shepherd Chow who runs security here at Upcomingdiscs. We call it Baby On-Board Security, and that spells O U C H if you’re snoopin’ around this place. That goes for you Fed Ex/UPS guys. This nose knows how to spot trouble. And, speaking of trouble you should see the cool art I made with the toilet paper roll the other day. Of course, no one around here appreciates a true artist in their own time, and I got in trouble again. That meant I had to watch this latest dog movie in the living room instead of the theater. Something about a 25-to-life ban, whatever that means. I don’t wanna talk about that right now.

The truth is I don’t wanna talk about the latest movie either, but I can’t get out of this one. If it weren’t for the whole art project thing I might have been able to skip this one, but I didn’t wanna push my luck, if you know what I mean. Thanks to me you won’t have to go through what I did. No, I’m not talking about the toilet paper incident, as it’s come to be known around here. I’m talking about The Adventures Of Bailey: Christmas Hero. Trust me, I’m gonna be your real Christmas Hero when I keep you from wasting about 80 minutes of your life on this one. Hey, that’s like months in dog years.

Bailey (Turner) and Duke (Hawkins) are brother dogs in the Baker family. It’s getting close to Christmas and Bailey is trying to score some major treats from the big man himself, Santa Claus. It doesn’t go over too well. Bailey ends up creating quite a disturbance at Santa’s place, and now he’s afraid he won’t get anything for Christmas. When the Baker parents go on a romantic holiday right before Christmas, they leave the dogs and the kids Truman (Bumpass) and Abbi (Galyean) with their grandparents on a farm. That’s where Bailey meets Dahli Llama (Cardenas) who is actually a llama. He’s told a story of a great Indian Chief who can set his situation with Santa to rights in time for Christmas. So Bailey and Duke run out into the desert to find him. Duke gets sick, and Bailey has to make an important decision if he wants to get back to the family in time for Christmas.

I don’t get it. I don’t run away. I guard the fortress here. I chew on a little tissue paper and I’m a bad dog. I watch these movies and these guys get into all kinds of serious trouble, and they end up with plenty of hugs and treats. What gives here?

This is another one of those movies where you can hear the dog “thinking” and hear him talk to other animals. You humans really think you know what goes on in a dog’s mind? If you did, I’d be a hero for what I did to that paper. If you could only read a real dog’s mind. Heck, I gotta mind full of junk. The stuff Bailey says and thinks is pretty lame. Liz and Steve Franke need to be put out of my misery for writing this stuff. Look, I don’t mind a little silly. Silly can be a lot of fun, and I know these movies are targeted at young kids. But let’s not forget there might be innocent adults, or worse, mostly innocent dogs in the room. And kids are a lot smarter than some of these movie guys think they are. I know dogs are.

The acting here is also pretty lame, but I don’t blame any of the actors. It’s the lines they have to deliver that make good performances impossible. They didn’t spend much money on this one. The dog mouths don’t even move when they talk. I hope they spent some of that budget on treats for the dog actors, because their reputations are gonna take a hit on this one. It’s simple, folks. It’s one of the first commands a good dog learns: Stay! might I add an additional word: Away!. I wanna give a shout out to my buddy Piero G. out there. Here’s a high paw. (You can send treats instead). Skip Bailey and spend the time watching a classic this holiday season. Best of the New Year from me, Baby. “Woof.”

Baby was a German Shepherd/Chow mix canine reviewer at Upcomingdiscs from 2010 until 2016. She was also chief of security here with her Baby On Board Security side-business. And that spells F A N G S.
Black Like Me 12 Days Of Christmas Giveaways – Day Seven: Weight Loss Collection From Lionsgate