Posted in: No Huddle by Brent Lorentson on December 31st, 2012 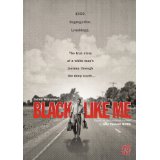 Back in 1964 a film was released about a reporter who wanted to know what it was like to be black in the deep south during the civil rights movement.  When I first heard this my initial reaction had me picturing some white guy in black face strolling the streets and then subsequently being beaten by both sides of the race coin.  It turns out this thankfully wasn’t the case, and the reporter, John Howard Griffin, underwent medical treatments, as well as hours under a sunlamp, to change the hue of his skin.  From the procedure on, the film explores a dark time in America seen through the eyes of both a white and a black man at the same time.

James Whitmore (The Shawshank Redemption and Them) plays the role of the reporter, whose name has been changed to John Horton for the film.  When we see him as a black man for the first time it is on a bus, sitting in the colored section, and standing next to his seat is a middle-aged white woman.  He looks up to her and wants to do the gentlemanly thing and offer her his seat, but her response is nothing but repulsion from this “negro” who dares to even look at her.  John can’t understand this reaction; after all it was her comfort he was concerned about, but this is only a glimpse into the bigot-filled world John has now opened himself up to, and things are only going to get worse.

The film jumps back and forth from before the procedure to the events John experiences as a black man.  When we first see John pitching his story about living as a black man in the deep south, well, just like the publisher you can’t help but feel this is a crazy but brilliant idea for an article.  It all seems like a big publicity stunt, but with time we see John genuinely does care about the racial divide and has the best intentions in doing the article.   It’s Whitmore’s performance that carries the film and keeps us engaged.  His compassion is genuine throughout, and we see him slide from one emotion to the next whether it is joy, concern, love or hate.  Whitmore expresses it all throughout this film and shows beneath the color of his skin there are so many complex emotions that make us what we are.

While hitchhiking his way through the south, taking a ride any chance he can get, we see an assortment of telling conversations he has throughout the film.  Each driver seems friendly enough at first; after all, they are nice enough to pick up a black man off the side of the road; they must be a “nice guy”.  But for the drivers on two separate occasions it’s as though they picked up John to either satisfy some strange sexual insecurity or to get a rise out of a black man so there is an excuse to shoot him.  Perhaps on the second part I’ve let my imagination get the better of me, but the driver does seem to enjoy getting a rise out of John and tells him how they handle troublemakers who get out of line.

Though the film makes some excellent observations, I have a difficult time accepting that this disguise worked so well that it fooled everyone.  I haven’t read the book, and perhaps in the book it mentions moments where someone became wise of the ruse at play.  After all John needs the assistance from a shoeshine man towards the start of his journey to learn how to be black.  Maybe I’m just naïve, but what makes us who we are as people isn’t simply the color of our skin but our heritage, our faith, our surroundings and so on.  And my point is, just because he dyes his skin and talks to a shoeshine man, how can he possibly understand how to “act black” especially in such polarizing times?  Is this not just as offensive as spouting a racial slur?

Everything manages to come to a head for John when he is casually walking the streets and he is harassed by a couple of unruly white guys.  John panics and makes a run for it; he tries to get aid from strangers on the street, but they deny seeing anything. It’s not till John has himself backed into an alleyway where he makes a bold move to taunt the white guys into the ally, and they begin to think twice about their actions.  This is the moment that breaks John, and he wants out of the new skin he’s in.  The film doesn’t linger on this moment long, nor does it attempt to spell anything out, but this moment sums up everything John was trying to discover for himself.

There is another beautiful moment that is so subtle but says so much when John is told by a man he is staying with that perhaps it is time he should go home. His responses is not so much to him wanting to go home but if it is possible to go back to the way things were after the experiences he’s had.  The emotion Whitmore expresses in this moment is a testament to the actor he is and makes this such a great performance.

This is a simple film with a complex message.  A message that stays true to even today’s views.  The films holds up as a mirror  to not just how one race views another but on a much broader scale how we view the world that we don’t quite understand.  This is a film that should be played in every school and discussed.

Brent Lorentson is a horror writer and film critic based out of Tampa, Florida. With a BA in Digital Film, he co-wrote and co-directed Scavenger Hunt. His short stories have appeared in various horror anthologies. In 2019 his short script Fertile Blood will be a part of the anthology horror film Slumber Party. He is currently working on his first novel A Dark and Secret Place set to be released in late 2019. Favorite Films: Taxi Driver, Fight Club, I Saw the Devil, The Wild Bunch, Dawn of the Dead, A Clockwork Orange, Pulp Fiction, Heathers, The Monster Squad, and High Fidelity.
Casino Royale Adventures of Bailey: Christmas Hero