Posted in: No Huddle by Jeremy Butler on January 2nd, 2013 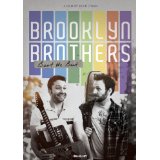 “Have you ever thought for maybe a second that — that this is it? I mean people that sit at the same desk every day for eight to ten hours a day and then they sleep for nine hours day, and then they truly live their life for maybe I don’t know, five hours at the most. I bet those people would love being here.”

This movie caught me off guard like a right hook to the face, which coincidently is something the main character experiences himself. A directorial debut for Ryan O’Nan (he also wrote and starred), Brooklyn Brothers is an indie film that I had reservations about the moment I picked it up, and yet there was still something that intrigued me about it. Could have been that I recognized Ryan O’Nan from his stint of the short lived television series The Unusuals, or maybe it was his costar Michael Weston gleefully smiling on DVD cover art, holding a crate full of toy instruments. Either way I took a chance with this movie, and I am so glad that I did.

Heartbroken, unemployed, and band-less, songwriter Alex has been having a rough go of things lately. His entire life he has had one goal, to become a famous musician, but when you’re in city where there are thousands if not millions of others with the same goal, it can be next to impossible. After an altercation at a gig with a handicapped student (that’s right, I said handicapped), Alex is just about to hang it up and accept failure.

Enter Jim (Michael Weston, Liberal Arts), slightly off and eccentric Jim, whose band has conveniently also abandoned him in favor of someone else. Having seen Alex perform at an open mic night, he proposes that the two of them form their own band. Alex initially has reservations about Jim (probably due to Jim knocking him out with that aforementioned right hook) but then Jim sweetens the pot; he’s already booked a cross-country tour for them. With nothing to lose, Alex takes a chance, and the two hit the road.

After a few hiccups, the twosome performs at their first gig, and are successful, gaining the notice of club manager Cassidy (Arielle Kebbel, The Vampire Diaries), who decides to hit the road with them to manage them. Along the way, they will learn from each other and confront something about themselves that were unable to confront before.

This movie is living proof that you don’t need an extremely complex plot to create something of substance, that some of the greatest works can be born of the simplest ideas. Ryan O’Nan shows great talent as a writer, director, and actor. On the surface the film is a comedy with many layers and message about following your passions no matter where they may lead you. Michael Weston finally steps out from the behind the supporting-actor pack and gets to showcase his talents center stage, and after witnessing the monologue he delivered at the midway point of the film, I’m confident he’ll never have to go back.

The performances in this movie were excellent; however, it was the writing I really identified with; O’Nan did amazing job balancing a somewhat dramatic story with easy laugh-out-loud comedy. Thing I enjoyed most about the writing was the unpredictability of it; with some films you can tell what’s going to happen minutes before it happens, but not here. One minute we’re watching the main character perform a depressing song, the next thing you know he gets ambushed and stabbed with a fake knife!

Jeremy Butler is a film school graduate of the International Academy of Design and Technology. He is been writing for Upcomingdiscs since 2012; however, movies have played a big part of his life for much longer. Favorite genres include horror, science fiction/fantasy, and comedy. Favorite movies are V for Vendetta, Boondocks Saints, Kiss Kiss Bang Bang, and The Godfather.
Butter Kill ‘Em All (Blu-ray)