Posted in: Disc Reviews by Brent Lorentson on January 2nd, 2013 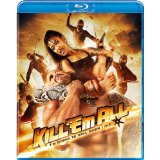 It’s hard to not appreciate a film that wastes no time jumping into the action, and with a title like Kill’em All you go in expecting the action to be piled on and non-stop.  I have to say I’m a little surprised this little film lived up to the title; after all most straight-to-DVD titles seem to be lackluster if not simply awful.  I’m also not saying this is a film that’ll be remembered too long either, but it is a B movie that delivers on the action and has Gordon Liu doing what he does best. After watching several of Bangkok’s elite assassins go about doing their dirty work and leaving a trail of bodies in their wake it is quickly followed by their capture.  At first when watching this I had thought they were being killed until we get to see them all gathered together in a massive concrete cell.  None of the professional killers seem to know one another; only a handful seem to know of one another which I found strange, after all how many elite assassins can one country have?  Well, it doesn’t take long till they discover they are all trapped in “the Killing Chamber”, a place where assassins and other people are brought to die.  What’s kind of cool is they are given a chance at freedom, but that chance only comes if they are the sole survivor of their captors’ game.

What follows are a series of duels to the death; as the survivors are whittled down, the desperation to survive becomes more intense.  The key three assassins Gabriel (Johnny Messner), Som (Ammara Siripong), and The Kid (Tim Man) are the only memorable survivors as they escape beyond the chamber and into a hellish warehouse filled with ninjas and numerous other bloodthirsty killers.  The fight choreography is fairly standard but is still fun, especially for those like me who pretty much get excited any time a ninja shows up.

Everything builds up to the inevitable confrontation with the ring leader Snakehead (Gordon Liu).  In the last title I reviewed that had Liu the filmmakers wasted the man’s talents, and let’s face it, when you see a movie that has Gordon Liu you want to see the man do some  ass-kicking.  Well, thankfully the filmmakers behind Kill’em All knew what they were doing and actually give us a fun fight with Liu up against the survivors.

Is it a fight we’ll always remember? Not a chance, but it still made my geeky heart go a-flutter seeing Liu working his martial arts magic.

Kill’em All is presented in a 1.78:1 ratio from its 1.85:1 original format.  The 1080p image is arrived at with an MPEG-4 AVC codec at an average of 25 mbps.  Shot in HD and mostly in low-light situations delivers a rather unimpressive image.  There is very little separation in the black levels, and when there is blood, it looks just as muddy as its surroundings.  I’m thinking the look was intentional to help set the tone of the film, to give it a dreary hellish tone.

The DTS-HD Master Audio 5.1 audio track does all that it can to immerse you in the combat with all the hits coming at you from all sides and the music booming from behind..  The added sound FX blends in well with the master audio track where even all the dialog is clear and easy to understand.

For those of you looking for a fun little martial arts romp to pass the time, this one is for you.  There’s nothing memorable going on here, but sometimes just a fun movie to pass the time is all you need.

Brent Lorentson is a horror writer and film critic based out of Tampa, Florida. With a BA in Digital Film, he co-wrote and co-directed Scavenger Hunt. His short stories have appeared in various horror anthologies. In 2019 his short script Fertile Blood will be a part of the anthology horror film Slumber Party. He is currently working on his first novel A Dark and Secret Place set to be released in late 2019. Favorite Films: Taxi Driver, Fight Club, I Saw the Devil, The Wild Bunch, Dawn of the Dead, A Clockwork Orange, Pulp Fiction, Heathers, The Monster Squad, and High Fidelity.
Brooklyn Brothers Beat The Best 12 Days Of Christmas Giveaways – Day 9: Ancient Egypt Anthology From A&E/History