Posted in: No Huddle by Archive Authors on January 4th, 2013 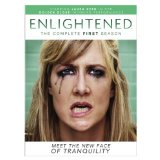 Enlightened is a new HBO series that tries to find a place in the storied and award-winning shelf of great shows from the cable giant. Many HBO series have had a strong hook to hang on like the gangster epics The Sopranos or Boardwalk Empire. Enlightened is a far more elusive concept. At the center of this series is Laura Dern’s character, who is a source of constant angst and confusion. Dern has already won a Golden Globe for her performance. The character is full of contradictions and internal conflicts.

The series starts with Dern having a breakdown at work and leaving for an intensive therapy center in Hawaii. When she returns, she is enlightened, or is she? The first season has ten episodes, and in those episodes we see Dern go through an emotional rollercoaster of highs, lows, and more lows. There are endless conflicts and moral outrages erupting in this character. She works for a vaguely sinister and bland corporate entity that seems to be the source of enormous health problems for the public but about which most of the workers have apathetic nonchalance. But Dern’s character has so many outrageous outbursts of issues great and small that most people have dismissed her as crazy and just wish she would go away.

Dern has addiction problems that she has left in her past. But not in her past is her ex-husband, played by Luke Wilson, who she is constantly visiting and calling despite his unrepentant use of drugs and alcohol.

Dern now lives with her mother, who is played by her real mother, Diane Ladd. The mother is a somewhat moody and disagreeable person who seems always disappointed in her daughter. One of the episodes reveals that her depressed countenance stems from something more tragic.

The creator of the series is Mike White, who has done many films. He is the writer, one of the directors, and one of the actors. His hyphenated status makes him a constant presence when the audio commentaries are done. It is his vision from beginning to end, but some top directors help out including the legendary Johnathan Demme (Silence of the Lambs).

The treatment that she received at the holistic treatment center gave her some coping and healing skills, but essentially she is still pretty erratic and difficult. A number of characters throughout the season tell her to her face that she is crazy. But even though at times she is exasperating, there are definitely times when she is enlightened. As the season draws to a close, she starts to focus more and more on issues that make her the moral and ethical center of the show. She becomes heroic and transcendent despite still doing many things that annoy and frustrate everyone around her.

Still, this is a show that’s hard to get a handle on. Where is it going? It doesn’t have a solid hook to build a story on. HBO has done shows like that before. The competition in television in the last ten years has gotten so intense and competitive. FX, AMC, Showtime and other cable channels have garnered more and more nominations and awards. But most of them fit into a safe genre that lead people in before letting them get hooked on characters. In Enlightened we are not on safe ground. The main characters are all deeply flawed and difficult, and the focus of the show is downright annoying.     It does become clear the more you watch the show, that as crazy as she is, she might be the one who is most sane. She has made herself an outsider through her self-destructive impulses, and as an outsider she is better able to see all the flaws in everyone around her. More importantly, she begins to see all the true evils in society, and she is beginning to formulate a plan. HBO has renewed the show for a second season, and soon we will learn exactly how ambitious and far-reaching that plan is.