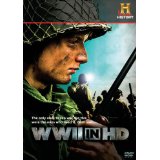 On the Tenth Day Of Christmas A&E/History  gives to you:

War In HD. This 6-disc DVD collection combines A&E/History’s award winning WWII In HD and Vietnam In HD all in one collection. We have two copies to give to two lucky winners at Upcomingdiscs. The footage has all been remastered in HD and much of it unseen until these shows were put together. They tell the brutal story of war in graphic detail. While the DVD’s themselves might not be in high definition, these discs provide the best image quality time and DVD technology can provide.

Gino Sassani is a member of the Southeastern Film Critic's Association (SEFCA). He is a film and television critic based in Tampa, Florida. He's also the Senior Editor here at Upcomingdiscs. Gino started reviewing films in the early 1990's as a segment of his local television show Focus. He's an award-winning recording artist for Omega Records. Gino is currently working on his 8th album Merchants & Mercenaries. Gino took over Upcomingdiscs Dec 1, 2008. He works out of a home theater he calls The Reel World. Favorite films: The Godfather, The Godfather Part II, The Body Snatcher (Val Lewton film with Karloff and Lugosi, not the pod people film), Unforgiven, Gladiator, The Lion King, Jaws, Son Of Frankenstein, The Good, The Bad And The Ugly, and Monsters, Inc.
Arbitrage (Blu-ray) Enlightened: The Complete First Season