Posted in: No Huddle by Gino Sassani on January 8th, 2013 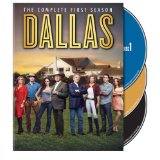 The drama continues; not trying to steal the slogan from TNT; however, it does seem fitting for the returning soap drama, Dallas, especially since TNT is the network that it airs on. I am certain that everyone has heard of this soap opera in one capacity or another. The series ran for thirteen seasons from 1978 to 1991, and caused worldwide spread pandemonium with one of the most famous cliffhangers in television, “Who Shot J.R.?” Well enough about what Dallas was, and on to what it is; for starters it’s back. More than twenty years after it went off the air, the series returns with some new faces and some familiar ones.

The series resumes twenty years later on the eve of the wedding of Christopher Ewing (Jesse Metcalfe, Desperate Housewives), Bobby’s adopted son. Christopher has just returned from Japan with a plan to move the family business out of oil and into alternative energy. John Ross Ewing III, J.R.’s son and Chris’s cousin, has other plans; after deviously drilling on the outskirts of Southfork Ranch, he has struck a reserve that will put the Ewing name back on top of the oil business and wants to start drilling on Southfork. Like their fathers before them, the two are at odds and ready to lock horns. Chris, who has always felt that he needed to earn the name Ewing, believes that alternative energy is the future; John Ross, on the other hand, believes that Southfork is his birthright and will stop at nothing to get it.

The battle isn’t limited to them; J.R., who has been living in an assisted living facility with clinical depression for years, begins to collaborate with his son after John Ross relays the news of Bobby’s plans to sell Southfork to a conservatory, thereby nullifying any attempt to ever drill on the property. Despite joining forces, can John Ross truly trust his father? Bobby, after receiving a life threatening diagnosis, is looking to end the all-consuming battle that has fractured his family. Can he make Christopher and John Ross see things his way and become the family that he and J.R. never could be?

Caught in the middle of their war are the women in their lives, starting with Elena (Jordana Brewster, Fast Five), daughter of the family cook and John Ross’s girlfriend as well as Chris’s former flame. Ambitious and determined to be more than just the help, Elena works to secure a future for herself. However, does that future lie with Chris or John Ross? Rebecca (Julie Gonzalo, Eli Stone) has been given the Ewing name and been welcomed into the family through her marriage to Chris, but is she as sweet and caring as she appears to be, or does she have her own agenda for her union with Chris? Will she betray their union for her own gain, or will Chris destroy their marriage because he can’t move on from Elena? The answers to all these questions lie within the discs.

Naturally when news of the this project became public, there was a great dissention from people loyal to the original, who believe that any attempt to remake the classic series would be nothing more than a cheap imitation. Those reservations quickly dissipated when original cast members Patrick Duffy, Linda Gray, and Larry Hagman announced that they would be taking part in the new series, and in my opinion that is the only way that this show could have succeeded, as a continuation, not a remake.

Though much of the buzz about the series was about the returning faces, the newcomers make their presence known with great performances. Josh Henderson is a perfect fit as the ruthless and manipulative John Ross who’s a “chip off the old block” as J.R. says at the end of episode 2. The chemistry between Metcalfe and Brewster is undeniable as the tragically separated couple Chris and Elena; however the most intriguing character of the new school without a doubt is Julie Gonzalo’s Rebecca Sutter, a woman of many layers. She starts off as the sweet and trusting fiancé, then transforms to the manipulative con-woman planning to double-cross her unsuspecting husband, but her true identity may be the most surprising revelation of the season.

As for the originals, Hagman steps back into his most famous role with ease (and though I was not old enough to watch it back then, thanks to some research on YouTube, I feel confident making such a statement). Hagman’s relationship with Duffy’s Bobby and Gray’s Sue Ellen still possess the same spark that made Dallas great all those years ago.

Dallas returns for its second season at the end of the month, unfortunately Larry Hagman passed away of throat cancer midway through production. In honor of the icon, I would request that fans tune in and cherish the final episodes of television’s most popular villain.

Gino Sassani is a member of the Southeastern Film Critic's Association (SEFCA). He is a film and television critic based in Tampa, Florida. He's also the Senior Editor here at Upcomingdiscs. Gino started reviewing films in the early 1990's as a segment of his local television show Focus. He's an award-winning recording artist for Omega Records. Gino is currently working on his 8th album Merchants & Mercenaries. Gino took over Upcomingdiscs Dec 1, 2008. He works out of a home theater he calls The Reel World. Favorite films: The Godfather, The Godfather Part II, The Body Snatcher (Val Lewton film with Karloff and Lugosi, not the pod people film), Unforgiven, Gladiator, The Lion King, Jaws, Son Of Frankenstein, The Good, The Bad And The Ugly, and Monsters, Inc.
The Life & Times of Tim: The Complete Third Season Frankenweenie (Blu-ray 3D/Blu-ray)