The Life & Times of Tim: The Complete Third Season

Posted in: No Huddle by Brent Lorentson on January 8th, 2013 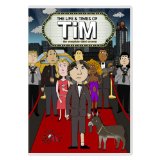 Coming into the HBO animated series on its third season, I wasn’t sure what to expect from The Life & Times of Tim.  Even after a quick search on IMDB to see what else creator Steve Dildarian had worked on, it left me with little to go on concerning what to possibly expect. I got to go into season three with virgin eyes, and overall it was a good time. When we first meet Tim (Dildarian), his life is at a low point, lower than what most twenty-something graduates would be used to.  But on the bright side Tim has managed to find a job as the personal assistant to a women’s basketball player (Kym Whitley), though Tim is too ashamed to admit to his girlfriend Amy (M.J. Otto) what he really does.  From episode one on we see a common formula take place, Tim decides to do something, and in the end his actions prove his idea was horrible or will simply end with disastrous results.  If anything Tim is something of an inspiration; after all, for those who claim to have terrible luck, they can always look to Tim and realize it could always be worse.  But Tim is also fictional and animated, so any comfort the show may give will most likely be short-lived.

Each episode consists of two separate stories running about 15 minutes each.  Having these mini episodes helps the pacing of each of the episodes, and even when there is a weaker story playing it at least manages enough time to fit in a couple laughs without overstaying its welcome.  Also having the 2-story episodes it seemed at least for me there was easily “the good story” and then “the weaker story”.  For me there wasn’t a point where I ever found myself hysterically laughing throughout an episode, but there were two that I could say with ease were my favorites.

In the first story Tim sees an older Hispanic man walking through his neighborhood posting flyers that have the man offering his services, but through a misunderstanding of the English language the ad seems to imply the man is gay.  Tim takes it upon himself to help the man make the flyer he really intended to make, and, well, the results are crude and hilarious.

The second story has Tim’s former employers in the middle of a lawsuit, and Tim is the key witness.  The people in corporate have a decision to make, and it’s as the title implies; Tim’s life is on the line.

The Strip Club Hostage Situation finds Tim taking his friends Stu and Rodney out to lunch at a strip club using the company card.  Just as the boys are having a good time, a man charges into the club holding everyone hostage till someone brings his girlfriend back to him.  Watching how Tim tries to take charge of the situation is ridiculous, and for me it’s the ending of the episode that brings it all together and made this my favorite of the season.

Game Night is the episode filled with the most laughs as Tim decides to venture out into the cold to buy the game Jinga while his girlfriend and friends elect to stay inside and play the game, “How I lost my virginity.”  With an amusing take on the tongue on a flag pole scene from A Christmas Story, to hearing all the loss of virginity tales, this story kept me laughing the most.

These weren’t the only good episodes, but they were the ones that left the biggest impression.  Some of the episodes were for the most part simply forgettable.  But one thing that shocked me most about the show was how it managed to nab so many star cameos: Tim Meadows, Fred Ward, Alfred Molina, and my personal favorite cameo Penny Marshall as the head of public relations for Omnicorp.

The show’s strength is in its writing; the animation is nothing pretty to look at and is about on par if not a little below the standard animated television you can find on any other network.  The appeal of the show is that it seems to not care about pleasing everyone but focus on the fans that return week after week.  Sure, it seems obvious they want to please their fans, but so often shows seem to feel the need to broaden their horizons in the hopes of growing their viewership.  Though I’d like to see more of The Life & Times of Tim, I’m just not sure how much life this show really has left in it.

Brent Lorentson is a horror writer and film critic based out of Tampa, Florida. With a BA in Digital Film, he co-wrote and co-directed Scavenger Hunt. His short stories have appeared in various horror anthologies. In 2019 his short script Fertile Blood will be a part of the anthology horror film Slumber Party. He is currently working on his first novel A Dark and Secret Place set to be released in late 2019. Favorite Films: Taxi Driver, Fight Club, I Saw the Devil, The Wild Bunch, Dawn of the Dead, A Clockwork Orange, Pulp Fiction, Heathers, The Monster Squad, and High Fidelity.
Episodes – The Complete First & Second Seasons Dallas: The Complete First Season