Harland Williams: A Force of Nature

Posted in: No Huddle by Jonathan Foster on January 10th, 2013 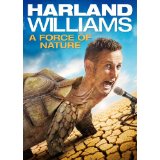 If you watched any comedic movie in the late ’90s, you’ve seen Harland Williams. A funny guy who always played the dummy (see Half Baked and Down Periscope), his career never took off the way similar stand-up comics like Jim Carrey and Norm MacDonald did. In this special, Harland performs his trademark wry and goofy comedy in a new, innovative way: the comedian does his routine outside and with no audience.

It’s just him and a microphone on top of a mesa in the Mojave Desert. Harland doesn’t mind breaking the fourth wall, telling the viewer at the start that it’s okay there’s no audience; that he believes you are smart and “I think you’ll know when to laugh.” Just in case we miss something, though, he throws sunflower seeds at us if he feels something was particularly funny, like his polio walk. (“C’mon, polio doesn’t even exist any more!”) This breaking of the fourth wall makes you feel like you’re there on the mesa with him.

A Force of Nature starts off a bit slow, and it’s almost uncomfortable. It’s like watching a schizophrenic man’s mind slowly unravel. But after about eight minutes, he hits his stride and the jokes don’t stop. Even his random, stream of consciousness asides — while breaking the flow of his routine — are really funny. Probably my favorite of these is the “Did You Know?” segments, such as “Did you know if you shake a Chinese person for 30 seconds, they’ll speak perfect English?”

While it would seem weird to perform out in the middle of nowhere, Harland actually makes it work. For nearly an hour, he rips on whatever pops into his goofy head. Dinosaurs, sex, babies, technology, Mother Nature; no topic is safe. Having no audience is actually liberating, allowing you to laugh at whatever you find funny with no pressure. It also provides some really funny unscripted moments, such as Harland getting buzzed by some low-flying aircraft or getting “heckled” by a crow. The crow bits had me crying because I was laughing so hard.

This is a really funny DVD, well worth your time and money.