Method To The Madness of Jerry Lewis

Posted in: No Huddle by Archive Authors on January 10th, 2013 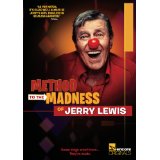 If you were to print out all the quotes from the interviews in Method to the Madness of Jerry Lewis, a 116-minute documentary, you would swear that Lewis himself wrote them all. Steven Spielberg, Quentin Tarantino, Jerry Seinfeld, Eddie Murphy, Carol Burnett, Billy Crystal, Chevy Chase, John Landis, Carl Reiner, Richard Lewis (no relation) and Alec Baldwin are all so effusive in their compliments as to almost defy belief. Woody Harrelson says if you don’t like Jerry Lewis, he doesn’t even want to hang out with you. Comedian/Actor Richard Belzer (Law and Order) shows off his Jerry Lewis tattoo. Jerry Seinfeld says that if you don’t laugh at Jerry Lewis, you don’t understand comedy. Everyone interviewed in this film is completely unreserved in their love and respect for the man.

The film is a fairly comprehensive, looking at the 80-year career of the 85-year-old hyphenate (he is comedian/director/writer/actor/singer). Director Gregg Barson was given pretty much a free hand to record Jerry Lewis, the man behind the scenes in his daily life and activities. What comes out is a fairly vibrant and fresh perspective on the legend and icon. I was personally surprised how intelligent and sharp he still is. From news reports in recent years, it was easy to get the impression that he was a doddering and delusional old nut job. One omission from the documentary is any mention of Lewis’s involvement in the Muscular Dystrophy Association which he singlehandedly turned into the most prominent charity in the world over many generations. It seems recently he has become disenchanted with the management, but it is not clarified here. What is brought into perspective is the truly monumental success of the man’s life and career. It is hard to estimate the money he has made, but it must be astounding. At one point during a comedy tour he had a little time to churn out a movie. He made The Bellboy for a little under 1 million dollars with no studio help and has personally pocketed over 300 million dollars from that film alone. For many years, Paramount Pictures wouldn’t have known what to do if they didn’t get two Jerry pictures a year, he was that important to their bottom line.

When Lewis and his partner for ten years, Dean Martin, played the Paramount theater in New York City, there was unprecedented pandemonium in the streets. They played eight shows a day, and to get people out of the theater they would promise pictures at the backstage door. There were literally thousands of people milling the streets in crazed excitement.

The most compelling traits that Lewis demonstrates in this documentary are his true love of people, his performer spirit, his incredible energy, and his deep desire to make people happy. We see him doing his onstage act at 85 as well as pictures of him at 5 in his mother and father’s vaudeville act.

Spielberg says that he was personally mentored by Lewis when he taught at UCLA and was inspired to continue that tradition. He also says that the video assist that everyone in the movie industry uses should have a sign over it saying “Jerry Lewis invented this”. Lewis’s sheer love of the filmmaking process actually prodded him create many innovations. It is often said that it is the French who lionize him but, Lewis corrects this impression. He lists the true order of his popularity in the world as 1) Italy, 2) Germany, 3) the Netherlands, 4) Japan, 5) Australia, and then France. He has been friends with all the presidents, but JFK took special pains to get him secretly into the White House over 19 times in his short presidency.

I have come away from watching this documentary with a heightened respect for the man. He does not seem weak or addled at all. He specifically says that he expects to live to at least 102 so he can beat Bob Hope and George Burns in their robust longevity. The two hour film only whetted my appetite for more information on Jerry Lewis and his life and career.