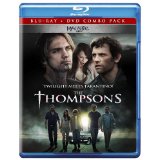 Just as I was starting to believe that the vampire movie genre was bankrupt of originality, I am gifted with a film unlike any other vampire film I’ve ever seen. Don’t you just love when that happens? I’m not going to pretend that I didn’t have reservations about this movie going in, especially with it being a sequel to The Hamiltons, a film I had not seen nor heard of before this film made it onto my docket. However all of my reservations subsided within fifteen minutes of pressing the play button. With a title like “The Thompsons” I was expecting it to be nothing more than vamp ripoff of Rob Zombie’s The Devil’s Rejects, but this film has heart along with the appropriate amount of blood and gore to keep it from becoming too sappy.

Narrated by Francis Hamilton, the middle child in a family of five, he along with his siblings David, Wendell, Darlene, and Lenny travel a lot. After death of their parents, the family became restless and for years have been on an endless journey to find a permanent place to call home. A place they can be their true selves, a place where they don’t have to hide their “disease” as Francis calls it. The entire family was born vampires, and as vampires they must consume blood to survive. As a result of their affliction, they are unable to settle in one place too long because it would only be a matter of time before they were discovered, hence their constant moving.

This condition affects each member of the family differently; David, the eldest brother, feels it is his duty to protect the family and ensure that they are controlling their urges. The twins, Wendell and Darlene, revel in their existence and gorge themselves. Francis is the most conflicted of them all, though he accepts the fact that he is a monster and killing is necessary for his survival, he takes no pleasure in the kill.

A pit stop in the Mojave Desert serves as the catalyst for the film. While stopping for gas, a band of robbers comes in and holds up the bar next door, a bar Wendell happens to be in at the time. Unaware of the happenings in the bar, the youngest brother Lenny goes to retrieve Wendell. Startling the robbers, one of them fires and hits him. Consumed with rage, the family slaughters everyone in the bar, robbers and bystanders alike, with the entire thing being filmed via security camera. Their faces a splashed on every television screen in the country dubbing them “The Thompsons.”

Now on the run and desperate for a way to save their brother, the family travels overseas to London, searching for others like them that may be able to help. Salvation appears to come in the form of a mysterious contact known only as “Manderson” in the town of Ludlow. Francis is sent to find him, what he finds is more than he expects and means danger for his family and himself.

On the poster for this film, the logline reads: “Twilight meets Tarantino.” To that I say…hardly. Not trying to be condescending, but I feel that this film should not be compared to either; it should be treated as an original piece of work. To that effect, that was film’s greatest strength: its originality. This is a story about five siblings who are otherwise alone in the world searching for their place in the world, but with enough blood and gore to butch it up out of the chick flick column.

Cory Knauf is a true leading man, holding the focus the entire film through his narration and some anguish. The best demonstration of his anguish comes at the beginning of the massacre scene, when he realizes they will have to eliminate all witnesses and a woman looks into his vampiric eyes and calls him a monster. He stares at her for a second and simply replies, “You’re right.” Now that was an excellent piece of acting. Elizabeth Henstridge doesn’t shy away either as his love interest Riley Stuart; switching from girl-next-door-friendly to duplicitous devil with true authenticity (call me crazy, but there’s something attractive about a girl with that quality).

A good film with a nice tempo, and heart, don’t forget the heart. The film preaches the importance of family, and how as long as you’re with your family, you are home.

Jeremy Butler is a film school graduate of the International Academy of Design and Technology. He is been writing for Upcomingdiscs since 2012; however, movies have played a big part of his life for much longer. Favorite genres include horror, science fiction/fantasy, and comedy. Favorite movies are V for Vendetta, Boondocks Saints, Kiss Kiss Bang Bang, and The Godfather.
Allegiance (Blu-ray) Star Trek: The Next Generation – Season Two (Blu-ray)