Posted in: Disc Reviews by Jonathan Foster on January 13th, 2013 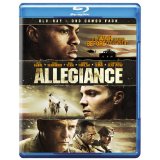 What do you do when you have to choose between the law and what is morally right? Lieutenant Danny Sefton (Seth Gabel, TV’s Dirty Sexy Money and Fringe) faces that very problem in Allegiance. Having lost the respect of the men in his command by transferring to a recruiting position right before they are to deploy to Iraq, Sefton faces a crisis of conscience when one of those men — Specialist Chris Reyes (Shad “Bow Wow” Moss, Like Mike, Roll Bounce) — has his non-deployment waiver revoked.

Reyes’ son is sick. However, due to conflicting diagnoses — one says Stage 4 lung cancer; the other chronic asthma — and the fact that he’s the best medic in the company (and they don’t have a replacement), Lieutenant Colonel Owens (Aidan Quinn, Jonah Hex, TV’s Elementary) decides to deploy Reyes. Having exhausted all his options, Reyes tells Sefton he intends to go AWOL and asks for Sefton’s help.

What follows is a cat-and-mouse game worthy of Prison Break. Chasing Reyes is Lieutenant Alec Chambers (Pablo Schreiber, TV’s The Wire and Liev “Sabertooth” Schreiber’s half-brother), Sefton’s replacement and Mr. By-the-Book. To him, going AWOL is the highest crime someone in the Army can commit.

This movie is extremely compelling, helped along by tight pacing and a dramatic score. Every performer shines in his role, especially Moss. I fully expected him to be horrible, but he was probably the best actor in the film. He really made you feel for his character. Gabel and Schreiber are also good, especially when they share screen time. They play off each other very well, filling each scene with tension so thick it practically oozes off the screen.

While this movie is pretty good, there was one thing that kept bugging me a little bit: the premise. I found it just a little hard to swallow for a couple reasons: 1) Would the Army really be so callous as to keep a father from his possibly dying child and 2) I get that Reyes is a good medic, but you expect me to believe there’s NOBODY who can replace him? Maybe I overthink things, but these questions stuck in my head throughout the movie. What I liked most about this movie is that both sides are presented as being in the right, providing discussion fodder long after the final credits roll.

The aspect ratio for Allegiance is 2.35:1. The 1080p image is achieved with an AVC MPEG-4 codec at an average of 21 mbps. While several of the scenes inside the base have a bleak, muted feel to them, it actually helps convey the emotion of the film. The black levels are good, allowing you to see everything during the night scenes, especially during the movie’s climatic tunnel chase scene.

The DTS-HD Master Audio 5.1 track is really good with the score for this film. The music is almost another actor, helping express the mood of the moment. It fails the dialogue a couple times, though, and I had to re-watch those scenes with subtitles on to catch what was said.

Commentary with Seth Gabel, director Michael Connors and producer Sean Mullin: The lead actor, director and producer provide some interesting and humorous insights into the film, including busting the producer’s chops for his silent, on-camera role. (He didn’t seem to know where to look.)

The Making of Allegiance (4:59): The cast and crew talk about their characters and trying to present each side fairly. Moss says he related to his character’s conflict.

Allegiance is a movie with a mission. It wants to make you think about what you’d do in this situation. While many films would merely preach at you, Allegiance presents both sides and lets you make the call. While the ending wasn’t what I felt it should be, you may like it. It’s definitely worth checking out and renting.