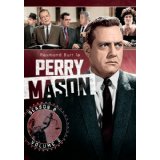 Erle Stanley Gardner wrote crime fiction, and while many of his 100 or so works are unknown to most of us, he created a character who has become as identified with criminal lawyers as any other in fiction. It was in these crime novels that Perry Mason first faced a courtroom. He developed a style where he would investigate these terrible crimes his clients were on trial for. He would find the real killer, and in what has become a Hollywood cliché, reveal his findings in a crucial moment during the trial. While we may not remember the novels, we all remember the man in the persona of Raymond Burr.  Burr had a commanding presence on our screens and enjoyed a well-deserved 11-year run as the clever lawyer. What makes this run so amazing is that the show followed pretty much the same pattern the entire time. We always know what’s going to happen, but we wait eagerly for that gotcha moment when Perry faces the witness on the stand. We know when he’s got the guy squarely in his sights, and we can’t sit still waiting for him to pull the trigger. OK, so maybe that’s a little over the top, but so was Perry Mason. From the moment you heard that distinctive theme, the stage was set. To say that Perry Mason defined the lawyer show for decades would be an understatement. Folks like Matlock and shows like The Practice are strikingly similar to Perry Mason. If you haven’t checked this show out, this is your chance. See where it all began.

Here you’ll find the last 15 episodes of the 8th season on four discs.

I like the show, and you’ll likely want the entire series if you’re a fan. For the casual collector, this just isn’t the best block of episodes. There weren’t any really big guest stars, and the episodes were all pretty much formula television. Perry does get another rare loss here, but you can bet he wasn’t really down for the count. Of course, there might be a fan out there who counts an episode here as one of the best. That just wasn’t my experience. My job is to put my experience into words. “Language is more than a system of communication between people; in a way it’s a permanent record of experience, and people of different cultures often react differently to the same experiences.”

Gino Sassani is a member of the Southeastern Film Critic's Association (SEFCA). He is a film and television critic based in Tampa, Florida. He's also the Senior Editor here at Upcomingdiscs. Gino started reviewing films in the early 1990's as a segment of his local television show Focus. He's an award-winning recording artist for Omega Records. Gino is currently working on his 8th album Merchants & Mercenaries. Gino took over Upcomingdiscs Dec 1, 2008. He works out of a home theater he calls The Reel World. Favorite films: The Godfather, The Godfather Part II, The Body Snatcher (Val Lewton film with Karloff and Lugosi, not the pod people film), Unforgiven, Gladiator, The Lion King, Jaws, Son Of Frankenstein, The Good, The Bad And The Ugly, and Monsters, Inc.
George Lopez: It’s Not Me, It’s You Nickelodeon Let’s Learn ABCs & 123s