George Lopez: It’s Not Me, It’s You 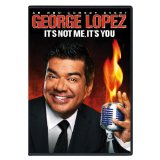 The first time I really observed George Lopez was during his sitcom on ABC, The George Lopez Show. After that first episode, I was hooked and watched every episode religiously up until the departure of Masiela Lusha (the new storylines and the introduction of Aimee Garcia as Lusha’s  replacement caused the show to lose much of its original  appeal). From there I transitioned to his standups specials and his big screen movie appearances. If he was in it, I was there. His routine had a flair. When he talked about how he grew up, you could imagine it as if it was your own life. However, comedy has evolved, and a comedian’s material must evolve with it, something Lopez evidently hasn’t done.

It’s Not Me, It’s You marks Lopez’s third HBO standup special (his ninth standup overall). He kicks it off with a strong opening: driving down the road on his way to his to perform, during which he runs into some familiar faces such as Ray Romano, Eva Longoria, and Conan O’Brien, who all wish him good luck on his show. Also, the entire intro is backed up with his patented theme song, “Low Rider” by War. It is a good opening, always nice to see other celebrities lend a helping hand.

From the intro, Lopez appears on stage and hypes the crowd up for a few minutes before launching into his bit. He covers the usual subjects such as old-school values and the different parenting techniques among the races. The part about childproofing is good for a few laughs, but the rest he’s covered before. He does manage to mix in some commentary about the past election between Romney and Obama and tell an entertaining story about stealing a placemat from the White House. The portion of the set devoted to the White House was probably the part where I laughed the most. Whether my laughter was out of genuine comedy or out of respect for the glory Lopez once held for me, I am not sure.

My major issue would have to be the length of the special: 56 minutes. That is not long enough if you ask me. Seriously, if I pay hard-earned money to come see your act, I want at least ninety minutes. Anything less is simply a waste of both my time and my money (neither of which of I have an infinite amount of).

Though I personally found “Why you crying” more entertaining, I wouldn’t exactly call this latest special a failure. Lopez commits to the bit, maintaining a great level of energy throughout the entire time he’s on stage.  It’s the repetition of the material that just didn’t stick with me; it’s time to spice up the recipe a bit.

Jeremy Butler is a film school graduate of the International Academy of Design and Technology. He is been writing for Upcomingdiscs since 2012; however, movies have played a big part of his life for much longer. Favorite genres include horror, science fiction/fantasy, and comedy. Favorite movies are V for Vendetta, Boondocks Saints, Kiss Kiss Bang Bang, and The Godfather.
I Am Bruce Lee (Blu-ray) Perry Mason: The Eighth Season, Vol. 2