Thor: Legend of the Magical Hammer 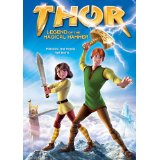 Well, it’s not the Marvel version, but it’s still mildly entertaining. A clear attempt to capitalize on the popularity made by the Hemsworth live-action films about the hammer-wielding Norse God of Thunder and Lightning, but hey, isn’t that what filmmaking is all about, making something the audience will actually pay attention to? This time Thor is surrounded by an animated family-friendly shell. Well, though I am much older than this film’s targeted demographic, I still feel that I can objectively say: there are worst ways to kill 90 minutes. Trust me, I know.

In this animated retelling, Thor is the son of Odin, King of the Gods, and a human mother. Neglected by his father, Thor is raised by his mother alone and is pushed to follow in her footsteps and work as the village’s blacksmith. Thor longs for something more; he believes that he is destined for more. He believes that it is his destiny to become a warrior and fight side by side with his father.

In reality (ironic to say since this is a cartoon), Odin is far from the father that Thor imagines. A lazy and entitled god who is more interested in enjoying the sacrifices given to him by the people he is supposed to serve than the people themselves. During a feast, Odin is approached by a weapon-selling goblin who offers him the self-proclaimed most powerful weapon in the world: Crusher, a talking hammer (yeah, I know it sounds ridiculous, but just go with it) of immense power. Odin is intrigued by the weapon and believes that it will help him win the war between the Gods and Giants led by the Ice Queen. However in a feat of anger after a fiasco that cost him an eye, Odin throws the hammer away, into the world of Man.

Crusher crash lands through Thor’s home. Finding it, Thor originally believes the hammer to be a message from his father that he is meant to be nothing more than a blacksmith. The next night, Thor’s village is attacked by the Giants, and Thor learns that Crusher is more than just an ordinary hammer. When his mother and best friend are kidnapped by the Giants, Thor and Crusher join forces to bring down the Ice Queen.

It’s been a few years since my cartoon days, but this wasn’t a bad film to reintroduce me back to cartoons. It was somewhat subtle with its comedy, which can be a strength as well as a weakness. The driving force behind much of the comedy was Crusher the talking hammer (however I think if the hammer would have had the true name of Mjolnir, it would have been more fitting).

The quality of a cartoon is rooted in its ability to balance comedy with instilling the audience with wholesome values that can be used in everyday life. Thor shows courage when battling the Giants without a weapon, bravery when he choose to go after the Ice Queen without the aid of his father, friendship when he attempts to rescue his best friend Etta , and belief in himself as he rises to become a warrior. I think it meets the requirement.

Jeremy Butler is a film school graduate of the International Academy of Design and Technology. He is been writing for Upcomingdiscs since 2012; however, movies have played a big part of his life for much longer. Favorite genres include horror, science fiction/fantasy, and comedy. Favorite movies are V for Vendetta, Boondocks Saints, Kiss Kiss Bang Bang, and The Godfather.
Love Me (Blu-ray) The Possession (Blu-ray)