Posted in: Disc Reviews by Brent Lorentson on January 23rd, 2013 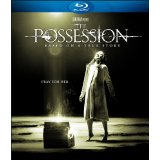 Anytime a horror film is released with a religious element, I can’t help but be a little interested.  The film that first won me over for this sub-genre was, of course, The Exorcist, and ever since seeing that film I keep hoping that one day a film will hold up to it in quality, but it seems I’ll be waiting a while.  That’s not to say there haven’t been some good films to come out along the way.  The Possession is one of those valiant attempts that brings something fresh to the genre but never quite reaches its full potential. Before going into this film I was familiar with the “true story” surrounding the Dibbuk box, and I’ve always felt if there was ever a story to rival The Exorcist or The Omen, it would revolve around this box.  I don’t want to get into the history of the box because most of the story has little to do with the movie, and in my opinion that is part of the reason this film falls short of what could have been.

The film opens as an elderly woman approaches the cursed box to destroy it.  Unfortunately for her the box knows what she is up to and punishes her for it.  She is violently tossed around her living room as though she were nothing more than a rag doll; outside her son stands unaware of the punishment she is taking.   It’s clear this unseen force is powerful, but what is it?

When we first meet the Brenek family they are going through the motions following a divorce. Clyde (Jeffrey Dean Morgan) is doing what he can to play the good dad but also juggle his life as a basketball coach at a nearby school.  But things are only going to get worse for the Brenek family after Clyde purchases an antique box at a yard sale for his youngest daughter Em (Natasha Calis).  The box is seamless, with no obvious way to open it, but with a quick shake of the box loose items are jostled around. What starts as mild curiosity quickly spirals into an unhealthy attachment to the box.  It is when the box is finally opened that of course bad things seem to occur around the box.

A good portion of the film seems a bit of a rehash of numerous other films, but it’s the acting by those involved that helped keep me invested in the characters.  As Em seems to slip further away, slowly being consumed by evil, we see Clyde evolve into a caring and concerned father.  His concern is very warranted; it’s just a mystery how it would take so long for the mother, Stephanie (Kyra Sedgwick), to notice a change in her daughter.  It’s not till Stephanie sees an image of something very unnatural inside her daughter during an MRI that she accepts that there is something wrong.

With time running out for his daughter, Clyde tracks down a rabbi who can give him answers to what the box is and most importantly how to save his daughter before it’s too late.  This of course leads to the inevitable attempt at an exorcism.  Though the first two thirds of the film plays out more as a family drama with horror elements, the final third of the film plays out as the horror film we anticipated.

Thankfully this movie has a solid payoff, because for a while I was a little disappointed in what I was watching.  And though this film didn’t deliver to its full potential, it did deliver a solid performance by Calis that has me thinking she’s a young talent to keep an eye out for in the future.  The scenes between Clyde and Em are everything from charming to terrifying, and it’s this relationship that makes the later portion of the film as intense as it is.

The other achievement of this film is in its direction.  Not only does director Ole Bornedal (Nightwatch) pull out some great performances, he also delivers one of the better looking horror films.  He’s not trying to be cute with flashy camera shots or effects; instead he gives us beautifully framed wide shots along with a color palette that elevates the class of the film from the rest of the PG-13 horror pack.

The Possession is presented in an aspect ratio of 2.40:1 from an original aspect ratio of 2.35:1.  The 1080p image is arrived at with AVC MPEG-4 codec with an average 31 mbps.  This is a beautifully lit and shot film. Even the night sequences seem to have plenty of light which allows for plenty of detail and texture to be seen.  When there are moments where light is involved either with the box or a flashlight, it’s as though the light is overpowering and blows out the rest of the scene.  This seems more a stylistic choice than anything.  This isn’t a colorful film at all, and when blood appears it seems to pop more.  This is a great looking film over all.

The DTS-HD Master Audio 5.1 track is right on par with the video in delivering a quality experience.  From the start of the film the use of Polish whispering (I assume the voice of the box) and the score helps build a tension that is well choreographed and is a perfect example of everything coming together to make a great scene.  From the fluttering of moth’s wings to the clicking of a fork against a plate in a breakfast scene, this is a film that utilizes the power of sound to create atmosphere.  There are even moments where silence works equally as well in creating tension.

Commentary with director Ole Bornedal: Though he offers up plenty of information about the motivations behind his choices for the film, this is a commentary that is tough (but informative) to sit through.  His voice is slow and deliberate and is perfect for listening to if one has any trouble sleeping, though for those with an interest in film there are a few nice insights about directing.

The real history of the Dibbuk box: (13:19) A brief history about the true story about the box that inspired the film with interviews with previous owners of the box and them recalling the strange occurrences that took place when the box was in their possession.  We even get a brief glimpse of the actual box, which for me was pretty cool since though I’ve known of the box for some time, this was my first time getting to see it.

Though this may not be The Exorcist, it still is a fun entry in the religious horror genre.  I’m not sure how many people may remember this film in a couple years, but hopefully it will help raise the bar for the genre.

Brent Lorentson is a horror writer and film critic based out of Tampa, Florida. With a BA in Digital Film, he co-wrote and co-directed Scavenger Hunt. His short stories have appeared in various horror anthologies. In 2019 his short script Fertile Blood will be a part of the anthology horror film Slumber Party. He is currently working on his first novel A Dark and Secret Place set to be released in late 2019. Favorite Films: Taxi Driver, Fight Club, I Saw the Devil, The Wild Bunch, Dawn of the Dead, A Clockwork Orange, Pulp Fiction, Heathers, The Monster Squad, and High Fidelity.
Thor: Legend of the Magical Hammer Oppo Opens Up Your 3D Blu Horizons