Posted in: No Huddle by Jonathan Foster on January 28th, 2013 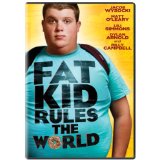 “The most important thing about being a drummer is the ability to hit hard.”

Fat Kid Rules the World tells the story of Troy Billings (Jacob Wysocki), a high school student who lives a lonely life because he’s, well, fat. Despite his large size, Troy is pretty much invisible. Unable to stand the monotony of his life, he steps in front of a bus. At the last minute, Marcus (Matt O’Leary, Domestic Disturbance, Brick), a dropout and punk rock musician, knocks him out of the vehicle’s path.

Stating that Troy owes him, Marcus tells Troy they’re going to form a punk rock band. Despite himself, Troy actually begins to enjoy his time with Marcus and soon discovers his ability to play drums.

As the relationship grows between these two very different teens, they find something in one another that they desperately need. In Marcus, Troy finds someone who encourages him and gives him self-confidence. In Troy, Marcus finds someone who genuinely cares about him — and a family for the first time. Together, they must overcome their failings and put on a killer punk rock show.

On a personal note, I really related to Troy, having felt most of the same things he feels throughout the film in high school. Wysocki perfectly portrays Troy, capturing his social awkwardness and glee at discovering his talent for drumming equally well. Even though Troy is the main character, O’Leary steals every scene as Marcus. It can’t be easy playing a character that’s so mercurial, yet O’Leary does it effortlessly. The scene where Troy confronts Marcus about Marcus’ drug use is probably my favorite moment, both for its heart-wrenching dialogue and humorous ending. The film also has a great supporting cast, including Lili Simmons (TV’s Banshee) as Troy’s love interest and Billy Campbell (The Rocketeer, TV’s The Killing) as Troy’s gruff but loving dad.

Director Matthew Lillard (yep, Shaggy himself) puts together a very solid movie in his directorial debut. To keep things from getting too dramatic, he throws in one of Troy’s Scrubs-esqe daydreams. Also, he refrains from the traditional feel-good ending, instead choosing a conclusion that is unique, yet satisfying. The movie is extremely well paced and the music from punk band Whiskey Tango really ties everything together.

If you’re looking for a humorous and dramatic independent film, this one’s for you. It’s easy to see how this won several awards at the South by Southwest Festival. I highly recommend you go out and buy this movie.