Posted in: No Huddle by Brent Lorentson on January 28th, 2013 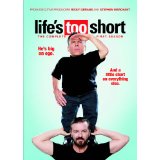 Warwick Davis many may remember as the dwarf that played Wicket the ewok in Return of the Jedi or as the leprechaun in the Leprechaun franchise.  The role younger audiences may be more familiar with is that of Professor Flitwick in the Harry Potter franchise.  In the new HBO series Life’s Too Short, Davis steps away from the fantasy world and into a faux reality show about none other than Warwick Davis. I have to admit Davis is far from the top of my list of celebrities I’d like to see star in their own “reality” show.  Seeing the show is produced by and co-stars Ricky Gervais and Stephen Merchant (both also worked together on Extras and The Office) did ignite my interest.  I understand Ricky Gervais is not for everyone; after all, he does seem to take pleasure in making his audience feel uncomfortable, but I happen to be a fan and believe he’s one of the most consistently funny comedians working currently.

I didn’t know what to expect coming into the show; sure, I figured Davis would end up the butt of many dwarf jokes, but what I wasn’t ready for is how much I really began to care for the portrayal of Davis in the show.  Davis does not simply just play himself in this faux documentary that follows him around.  Instead we see a man on a downward spiral as he gradually loses control of his life.  We not only watch as he goes through the heart wrenching effects of divorce but also we follow along as he struggles to get work as he tries to avoid being charged for tax evasion.  But even beyond these giant hurdles, Davis still has to deal with his day to day life as a dwarf and how it hinders him.

Though it all may seem depressing and bleak, the writing manages to still pull the humor out of the most painfully awkward moments.  And despite how unlikeable they attempt to make Davis, it’s still impossible to not feel somewhat bad for him, not because of his size but because he’s so naïve about how much of a jerk he is and how he brings the bad luck onto himself.  In one of the episodes we get to see Davis possibly ruin a date simply out of pride when he attempts to woo another woman simply because a matre’d implies he could not get an attractive woman.  How the date spirals all the more out of hand to simply becoming a bit of slapstick humor is why the show works.  I found myself wanting to grab Davis and try and stop him, but still, watching these disasters unfold one after the other is the charm of it all.

The show simply doesn’t leave Davis with all the funny bits; in fact, it’s the celebrities that appear throughout the show who get just as many laughs.  In Episode 1 we see Liam Neeson come into Gervais’s office requesting help because Neeson has now decided he wants to do comedy.  Seeing Neeson trying to make AIDS funny is, well, simply outrageous and funny.  But the guest star that seems to have the most fun is Johnny Depp, between taking his jabs at Gervais and using Davis as a tool to get into the role of Rumpelstiltskin is simply hilarious as well.

If there is any complaint it’s that though there are seven episodes in season one; it doesn’t seem to go anywhere.  Sure the second half of the season we see Davis stepping into the dating world and his divorce gets finalized, but really I didn’t see much of an arc with Davis or any other character in the show.  Granted this show has a formula that could go on for multiple seasons where we simply watch Davis find himself in many uncomfortable situations, but I’d like to see more substance added to the show and its characters.  I’m all for seeing the random celebrity cameo, but the cameos can’t be the driving force behind a show.

Brent Lorentson is a horror writer and film critic based out of Tampa, Florida. With a BA in Digital Film, he co-wrote and co-directed Scavenger Hunt. His short stories have appeared in various horror anthologies. In 2019 his short script Fertile Blood will be a part of the anthology horror film Slumber Party. He is currently working on his first novel A Dark and Secret Place set to be released in late 2019. Favorite Films: Taxi Driver, Fight Club, I Saw the Devil, The Wild Bunch, Dawn of the Dead, A Clockwork Orange, Pulp Fiction, Heathers, The Monster Squad, and High Fidelity.
Fat Kid Rules the World Paranormal Activity 4 (Blu-ray)