Posted in: No Huddle by Jeremy Butler on February 5th, 2013 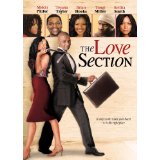 The Love Section is not a very grabbing title if you ask me, but to each his own I suppose. The new film is the latest product coming out of One Village Entertainment; the film does have some things going for it: an absolutely gorgeous leading lady (hubba hubba), a unique pairing of leads, and a very funny supporting character. However, the plot is not swimming in uncharted waters. Ali (Lawrence B. Adisa, Grindin) is a 32-year-old real estate agent and a ladies’ man, bouncing from woman to woman with very little desire for a permanent commitment. His married and porn-addicted best friend, Joel (Brian Hooks, 3 Strikes) thinks it’s time for him to settle down before he becomes the old man in the club. As fate would have it (movie fate, that is) one night out at a comedy club, Ali meets someone: Sandrine (Davetta Sherwood, The Young and The Restless), a drop-dead gorgeous 20-year-old. Age does little to deter Ali, who decides to pursue her, simply for the reason of making her another conquest. However, the more time he spends with Sandrine, no more he finds himself falling deeper and deeper into a commitment with her; not even the news that she is a single mother with a five-year-old son is enough to send him running for the hills.

Despite deep feelings for Sandrine, Ali is still unwilling to dive in with both feet, continuing to see other women on the side. He rationalizes to himself that a complete future may not be possible with Sandrine given the many obstacles in their way such as their age difference and her status as a single mom. Will Ali let a fear that it won’t work out cost him the opportunity to have something he’s never had before, or will he finally ready to let someone into the love section of his heart?

Brian Hooks steals the show in this film, distributing his brand of raunchy yet accessible comedy. The chemistry between the two leads seems mildly tame, but given their perceived age difference, a certain level of awkwardness is expected to lend authenticity. Davetta Sherwood outshines her costar with her beauty and her believability as a single mom going to school and looking for a partner to share her life with. Lawrence Adisa does little to draw me into his character and can be easily ignored in favor of Hooks or Sherwood in their shared scenes.

Plot-wise, I couldn’t help but compare it to Eddie Murphy’s Boomerang as I watched, the similarity in the idea of a man reaching a certain age but still unwilling to settle down takes away from the quality of this film. The film does however attempt to distinguish itself from other films that it may be compared to; playing on the age difference with the leads with a dream sequence of a certain Dateline series (I don’t think I need to say more for you to figure out what the skit is about). The overall film has an obvious low-budget look, but that does little to damage the overall story in my opinion; it’s worth a look.

Jeremy Butler is a film school graduate of the International Academy of Design and Technology. He is been writing for Upcomingdiscs since 2012; however, movies have played a big part of his life for much longer. Favorite genres include horror, science fiction/fantasy, and comedy. Favorite movies are V for Vendetta, Boondocks Saints, Kiss Kiss Bang Bang, and The Godfather.
Exclusive Interview With Paul Andrew Williams: Writer/Director Cherry Tree Lane Animaniacs: Volume 4