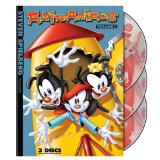 “It’s time for Animaniacs. And we’re zany to the max. So just sit back and relax, you’ll laugh ‘til you collapse. We’re Animaniacs!”

I am a 30-year-old man, and I didn’t need any help remembering the lyrics to the Animaniacs theme song. (Yikes! That sounds like a confession I should be making at my next Man-Child Anonymous meeting.) Similar to the influential work of Tex Avery and Chuck Jones, Animaniacs served as the first exposure many children in the ‘90s had to classical music and literary masterpieces. And like Looney Tunes, the show’s greatness lies in that it doesn’t just arbitrarily nod to the classics, it gets kids excited about them.

In case you’ve never seen Animaniacs, the show’s madcap cast is led by the mischief-loving Warner Brothers Yakko and Wakko (and the Warner Sister, Dot). This three-disc release includes the final 24 episodes in the show’s run. Each installment is generally comprised of several shorts — with notable exceptions like the surprisingly dramatic and affecting “One Flew Over the Cuckoo Clock” and the two-episode “Hooray for North Hollywood” saga — starring a recurring cast of characters.

The show’s most famous alums are unquestionably Pinky and the Brain, who were granted their own 1995 spinoff to better plot world domination. This collection, however, leans heavily on Slappy the Squirrel, a cranky showbiz vet who looks after her good-hearted nephew, and Chicken Boo, a six-foot-tall fowl who wears disguises to look like human guys. These happen to be two of my favorite characters — despite the fact that every Chicken Boo segment plays out pretty much the exact same way — so I didn’t mind. If you’re not careful, you might also learn something. (“The Multiplication Song”, “The Ballad of Magellan.”) On the other hand, some of the material is unavoidably dated (like a Macarena parody song called “Macademia Nut”). Also, Bernadette Peters fans are going to be bummed: there’s no Rita the cat short in this batch of episodes.

Animaniacs has a sharper edge than I recalled (or realized) as a kid. I remembered all of the meta-humor — Dot walks off the very first short in this collection, “Gimme the Works”, because she’s just not feeling it — but the show also takes some pretty pointed barbs at the sameness of Disney songs from the 1990s as well as parent/media groups who criticize cartoons for being too violent. Then there are the jokes that a 10 year old has no chance of getting, like everyone steering clear of Christopher Walken at a party because they’re creeped out by him. Or how about the recurring Goodfellas parody Goodfeathers, featuring a particularly short-fused pigeon? (I’m pretty sure my parents would be horrified if I saw Goodfellas at age 10. Actually, that’ not true; my mom was awesome.)

The series also showcased some of the best contemporary voiceover talent in the business, including Maurice LaMarche (The Brain), Frank Welker (Ralph the Guard), Jim Cummings (Narrator) and Nancy Cartwright (Mindy). Rob Paulsen and Tress MacNeille are excellent as ringleader Yakko and cute Dot, respectively. Meanwhile, Jess Harnell does a terrific Ringo Starr impersonation as Wakko. (Did I mention somebody along the line decided this furry, food-obsessed creature should sound like Ringo Starr?)

If there’s one drawback here it’s that a lot of the show’s signature bits — Yakko’s “Nations of the World”, “Les Miseranimals”, “The Presidents”, “The Great Wakkorotti” and Wakko’s song about the “50 States and Capitals” — came early in the show’s run and are subsequently absent from this collection. There’s still some good stuff here: I particularly enjoyed Wakko’s “2-Note Song” and Maria Von Trapp being re-cast as an insane person in “The Sound of Warners.” Each parody had to be recognizable, yet just different enough from the original to avoid a lawsuit.

The final short is “The Animaniacs Suite”, a disappointingly straightforward compilation of the show’s 99 episodes. (I guess I was expecting some sort of cracked take on a series finale.) Although this long-awaited release isn’t the best Animaniacs had to offer, it’s still a lot of fun and a must-watch for fans and completists alike.