Posted in: No Huddle by Brent Lorentson on February 13th, 2013 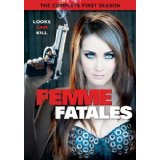 When this DVD found its way into my hands, I felt  this could go one of two ways; either this is going to be awful, or this is going to be fun as hell.  I have to admit I had a little more concern when I saw that the show aired on Cinemax and had never even heard of the show.  Despite my concern, the idea of an anthology series inspired by pulp novels and film noir revolving around badass chicks simply sounded too good to resist.  The result is a late-night trashy blend between The Twilight Zone and The Red Shoe Diaries.

Each 30-minute episode is introduced by the provocative host, Lilith (Tanit Phoenix) whose involvement in the show’s storyline may take some time to unfold but is worth the wait.  Lilith does what she does best, teasing the male audience with the promise of the sex and violence that will follow.  The lurid, violent scenes deliver throughout the series with one of the most beautiful ensemble of actresses thrown together.  Unfortunately beauty seems to win out over talent in the acting department. With this late-night erotica you can forgive the bad acting long enough to embrace the cool sleazy fun.

It did take a few episodes for the show to hit its stride, but by the time the two-part episode Behind Locked Doors finished, I was hooked.  It’s been some time since any studio has put out a fun women-in-prison flick, and that is where Behind Locked Doors delivers. In this double dose of girls-in-prison fun, we follow Lacey (Kit Wileese), a troubled young starlet sent to prison to do time after running over a family.  She’s sweet and used to getting her way, but prison is obviously a whole new world she needs to adjust to.  She uses her talents to manipulate the guards, inmates, and even the warden to get what she wants.  Think OZ, but instead of scary guys you get a variety of women who seem to be all sex-starved and hungry for a nibble of Lacey.

The following episode lets us take a breather from the steamy cells and takes us into the world of internet dating where a video game designer creates a fake profile to meet up for dinner with a beautiful member of the site.  But neither turns out to be what they stated in their ad.   First you think the guy is a bit of a dork but you can’t blame him for trying, but it’s the girl that has the bigger secret when it’s revealed she is a former assassin attempting to start a new life of her own.  This episode plays out like a fun buddy comedy and stays fun and fresh, leaving me wanting more of this unlikely duo.

What helps make the show work is that it refuses to be boxed into one genre.  Sure, each episode follows a stunning “femme fatale”, but the direction each story takes is unique in style and tone.  In Till Death Do Us Part we follow a bachelorette the day of her wedding as she tries to figure out how she managed to wake up with a dead male dancer in her bed.  But from this silly story later episodes delve into organ harvesting, serial killers, and gangsters waiting to collect on what is owed to them.

Aside from the beautiful ladies, it is the writing that sells the show.  The cheesy fun easily could have slid into cheesy awful, but the clever plots and witty dialog help keep these episodes alive (even if some of the acting is cringe-worthy at times).  But the person who deserves the most credit in my mind, and is the luckiest person on the production staff, is the casting director.  How they managed to wrangle so many beauties willing to practically bare all takes a good eye and simply must have been excruciatingly painful (heavy sarcasm here).

The direction and look of this show also delivers.  The lighting is exaggerated beautifully to give us some stunning shots, not simply of the women but of the violence at play as well.  Some will read this and think I’m nuts, but this is much slicker than your standard soft-core late night romp.  And the locations used, mostly ornate mansions, simply boost the production value and add to the atmosphere and tone of the show.

Though this is filled with strong female roles and women simply kicking butt, I find it hard to believe this will reach a female audience.  It’s a shame, because if given a chance I think there are women out there who could appreciate the show.  Then again I’m sure their rebuttal would be us guys should give Sex In The City or any other “chick” show a chance…We all know that’s not happening in this dojo (at least willingly).  I have no shame admitting how much fun I had with this show.  It’s not on par with Justified, The Walking Dead or Breaking Bad, but sometimes just a good time is all you need, and that’s what these femme fatales deliver.

Brent Lorentson is a horror writer and film critic based out of Tampa, Florida. With a BA in Digital Film, he co-wrote and co-directed Scavenger Hunt. His short stories have appeared in various horror anthologies. In 2019 his short script Fertile Blood will be a part of the anthology horror film Slumber Party. He is currently working on his first novel A Dark and Secret Place set to be released in late 2019. Favorite Films: Taxi Driver, Fight Club, I Saw the Devil, The Wild Bunch, Dawn of the Dead, A Clockwork Orange, Pulp Fiction, Heathers, The Monster Squad, and High Fidelity.
Bonanza: The Official Complete Fifth Season Beautiful Creatures