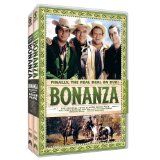 The show would see a lot of characters come and go over the years, but the fifth season saw the original cast pretty much intact. There were some classic episodes and moments to be found. The 5th season begins with She Walks In Beauty and wouldn’t you know it, an attractive young woman comes to town who is used to using men to get what she wants. Of course, Adam and Hoss both fall for the girl with the expected comical and serious results. Charles Dickens (played by Dr. Smith himself, Jonathan Harris) visits Virginia City in A Passion For Justice. He’s upset that the local paper is printing his work without consent or payment. This actually was a crusade that Dickens went on during an American visit. There were no international copyright laws, and he was losing a fortune having his work published here. And who do you think champions his cause here? You guessed it, Ben and the boys back up the famous writer. Joe is left for dead in the desert when he enters a ghost town in Twilight Town. The spooks come out in this rather odd supernatural episode. You’ll find it not quite like any other western episode you’ve seen…that wasn’t hosted by Rod Serling, that is. Another famous visit to the ranch can be found in Calamity Over Comstock. Calamity Jane is brought to the spread by Joe, who made a vow to take care of her to her dying father. In Journey Remembered we get a rare look at Ben’s early life. He finds an old journal he kept years ago, and it causes him to remember time he spent with one of his wives. This also happens to chronicle the birth of Hoss. The Laura Dayton character is introduced for the first time in The Waiting Game. Her husband has been killed, and Adam falls in love with the young woman who is trying to keep the tragic news away from her young child. Comedy is the name of the game in Hoss And The Leprechauns. Hoss claims he was given a special box by the mythical little folk. In Alias, Joe Cartwright Joe happens to look like an army deserter and is sentenced to be shot.

CBS did a better than average job on this release. Once again you have the option of buying both half sets together and get an entire season. There are 15 to go, but we’ll get there. They also added some extras to spice up the set, which include Audio Commentaries. This is also a great season of the show. Rarely do you find such an eclectic collection of episodes in one show’s season. There’s comedy, international intrigue, romance, and even some supernatural elements. Of course, there’s plenty of Ben, Joe, Adam, and especially Hoss. “Now, entertaining as they usually are, I just don’t have no time for a Hoss Cartwright explanation!”

Gino Sassani is a member of the Southeastern Film Critic's Association (SEFCA). He is a film and television critic based in Tampa, Florida. He's also the Senior Editor here at Upcomingdiscs. Gino started reviewing films in the early 1990's as a segment of his local television show Focus. He's an award-winning recording artist for Omega Records. Gino is currently working on his 8th album Merchants & Mercenaries. Gino took over Upcomingdiscs Dec 1, 2008. He works out of a home theater he calls The Reel World. Favorite films: The Godfather, The Godfather Part II, The Body Snatcher (Val Lewton film with Karloff and Lugosi, not the pod people film), Unforgiven, Gladiator, The Lion King, Jaws, Son Of Frankenstein, The Good, The Bad And The Ugly, and Monsters, Inc.
Gunsmoke: The Seventh Season, Vol. 2 Femme Fatales: The Complete First Season