A Good Day to Die Hard

Posted in: The Reel World by Gino Sassani on February 14th, 2013 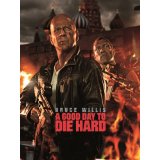 In case you haven’t been paying attention, 2013 is turning out to be the year of the returning action stars. The Governator Arnold Schwarzenegger teamed up with Korean action director Jee-woon Kim to deliver a very entertaining ride in The Last Stand. Sly Stallone teamed up with action icon Walter Hill to bring us the not-so-entertaining Bullet To The Head. Of course, perhaps the most eagerly awaited return was Bruce Willis back in the role that made him an action star in the first place. This is less Willis’s return and more a potential swansong for cowboy cop John McLane. It’s the fifth entry in the Die Hard franchise and the first sequel written originally as a Die Hard film and not something adapted to the character. With the disappointing Live Free Or Die Hard still fresh in my memory, all bets were off when I entered the cinema for a sneak peak of A Good Day To Die Hard.

John McLane (Willis) has learned that his son is in deep trouble in Russia. He’s been sent to prison and appears to be in the middle of a mob rivalry in that country. Never one to pass up a rescue mission, he heads to Moscow to see what he can do. From the moment he arrives he finds himself once again in the middle of the action. You see, John McClane, Jr. (Courtney), Jack to his friends, isn’t exactly in the kind of trouble dad thought. It’s actually much worse. Jack is a CIA operative, and Pop has just gotten in the way of an operation.

That’s where we meet Komarov (Koch). He’s the typical bad guy with the typical “secret file” that everyone wants to get their hands on, including the US government. That’s where Jack and his undercover operation come in. Komarov is willing to trade the file if Jack can get him and his daughter (Snigir) out of the country. Of course, there are other bad guys who are going to try to see that doesn’t happen. The operation is now blown, and it’s up to McLane (Sr.) to join the band even though he doesn’t really know the playlist. That’s OK, because he has a knack for improv when the “plan” falls apart. Father and son get to learn quite a lot about each other while dodging the expected shrapnel and heavy fire.

Original director John McTiernan wouldn’t be available for this Die Hard film. He’s currently a guest of the federal government for the better part of a year; the directing chores this time fell to John Moore. Moore doesn’t have an extensive resume, but Behind Enemy Lines was a better film than most folks gave him credit for. I suspect that the same will be said about A Good Day To Die Hard. I’ve said it many times before. Expectations kill, and if this film fails at the box office that will most certainly be the cause of death.

As one of the bad guys in the film reminds us, it’s not 1986 anymore. OK, so he missed it by two years. Still, one must face the facts that a lot of things have changed since Die Hard took us all by surprise in 1988. There have been enough sequels and imitators that the formula has become its own cliché. Consider that a hefty compliment to the film’s cast and crew. Today there’s a hunger for more and more action even if some of it borders on the absurd. OK, so some of this stuff doesn’t border on the absurd. It completely crosses the line far enough that it’s lost somewhere behind us.

Many will roll their eyes at a couple of the action scenes. There is an extended car chase that throws pretty much everything you’ve ever seen, and a few things you haven’t, at the audience. One of the best moments is Willis driving over the cars with his SUV, all the while calling out apologies to the unhearing victims of his “off road” adventure. A climactic scene involves a helicopter and a truck that is quite entertaining if you can suspend your belief as well as McClane suspends that truck off the copter’s ramp. The film is also quite predictable, but don’t you just love that in this kind of a film? Moore turns foreshadowing into outright telegraphing his moves. But he does it with a style and a wink that truly makes you feel like you’re totally in on the joke. The resulting carnage will satisfy the most demanding action fan.

But what sets the Die Hard franchise apart from other action films is not the action at all. It’s always been about character, one in particular. Bruce Willis has to be the most charming action star on the planet. No matter how many times Willis as McClane have been in the fight, he still manages to portray himself as the unlikely hero. Part McGyver and part James Bond, Willis manages to be disarming during all of that mayhem. I’m amazed at how easy the wisecracks come without sounding scripted at all. Perhaps it’s the accompanying smile. I won’t pretend to completely understand, but Willis represents the everyman better than any action star before or since. Couple that charm with the excellent chemistry he shares with Jai Courtney as his son, and you have a pretty good winning combination. Unfortunately, Sebastian Koch as Komarov is very much a throw-away character here. His motives and deeds never really play out quite right. The collection of bad guys never really amount to anything character-wise. So the film is more about the McClanes against the elements of the fight instead of the bad guys themselves. That’s all OK for the thrill ride I went to experience. It might be fatal for the box office and the future life of the franchise. There’s no Alan Rickman or Jeremy Irons here to balance the good guy-bad guy scales.

The Russian setting is actually a good thing for the franchise. What makes it work is that the environments are something we haven’t seen so many times before. Car chases come alive on roads that are a little bit alien to us. The final set piece is a little disappointing, however. McClane delivers his famous battle cry, and the return to an R-rating was a good move overall. There are wonderful homage moments to the first film that include a familiar bad-guy demise scene that brought quite a rouse from the screening I attended. Yes, there are a ton of in-jokes, but it’s fun when the director makes me feel like I’m actually in on the joke. Strap yourself in, and you’re likely to take a pretty cool ride. Uncle Joe keeps asking us why we need more than 10 bullets. A Good Day To Die Hard has the answer, “Killing bad guys!”

Gino Sassani is a member of the Southeastern Film Critic's Association (SEFCA). He is a film and television critic based in Tampa, Florida. He's also the Senior Editor here at Upcomingdiscs. Gino started reviewing films in the early 1990's as a segment of his local television show Focus. He's an award-winning recording artist for Omega Records. Gino is currently working on his 8th album Merchants & Mercenaries. Gino took over Upcomingdiscs Dec 1, 2008. He works out of a home theater he calls The Reel World. Favorite films: The Godfather, The Godfather Part II, The Body Snatcher (Val Lewton film with Karloff and Lugosi, not the pod people film), Unforgiven, Gladiator, The Lion King, Jaws, Son Of Frankenstein, The Good, The Bad And The Ugly, and Monsters, Inc.
Safe Haven Hello I Must Be Going