Hello I Must Be Going

Posted in: No Huddle by Brent Lorentson on February 15th, 2013 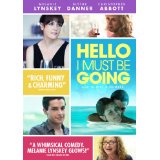 I remember watching Heavenly Creatures and believing Melanie Lynskey would break out and become a star.  I never would have guessed her co-star Kate Winslet would be the one to emerge from the film and be the A-list actress she has become.  After all, when you watch Heavenly Creatures, it’s hard to believe this was the first role Lynskey had in front of a camera; I would have imagined she was destined to play some great roles through her career.  Unfortunately that’s not the case, but I’m glad to see at the very least she has a career up on the screen.

In Lynskey’s new release, Hello I Must Be Going, we see her playing Amy who is recovering from a sudden divorce.  For her the divorce took away everything she believes she had made for herself, because she did everything she could to be the perfect wife.  This rejection has done more than crush her, and it has deflated her to the point of returning to live at home with her parents where she sleeps and mopes around most of the day.  Since we’ve all been through rejection at some point, it’s easy to relate to Amy on some level, and with Lynskey’s quirky portrayal of Amy, it’s hard to not be sucked in by her charm.

But things do take a turn for Amy when at a dinner party she meets Jeremy (Christopher Abbott), a 19-year-old actor.  Since he’s the son of one of the men her father is trying to conduct business with as well as a teenager, Amy knows better than to get involved but can’t seem to reject his advances.  For Amy seeing that she can still be wanted, and by a younger male no less, awakens a part of her that seemed to have been lost.  As we watch this romance bloom, we also see how Amy is looking to get back into the passions she had put aside in favor of being a good wife; the passion she misses most happens to be photography.

Not only is Amy busy in her love life but also going on around her is her father, Stan (John Rubinstein) doing what he can to close a deal that will help ensure his retirement.  No one seems to be looking forward to the retirement more than Ruth (Blythe Danner).  Spending these future retirement years has been a dream for Ruth, where finally she can have her husband and best friend all to herself again.  It’s not that Ruth is a selfish person, but she’s simply worked so hard ignoring her needs so long to keep the family together that she’s developed an obsession with her husband’s retirement.  It’s the interactions with Amy and Ruth that should be the most telling and eye-opening for Amy, since after all had Amy stayed in her marriage she would eventually have turned out to be just like her mother.

The title of the film comes from the lyrics of a song performed by Groucho Marx in the film Animal Crackers.  Apparently in her childhood Amy would stay up late watching Marx films with her father, and this was her bonding time with her father, so whenever she’s down she pops in one of the films to help cheer her up.  I understand using this as a device to comfort her, but unless I miss the metaphor, it seems more just a simple indulgence on the filmmakers part to include the Marx films.

What I got out of this film is basically what you’ll get out of most romantic comedies where people have to learn to love themselves to find happiness with themselves or others.  Though I found the story sweet, it did seem to play it safe and by the numbers.  Had it not been for Lynskey and Danner I would say the film would be a forgettable one, but thankfully their contributions gave the film the warmth it needed.  But instead of staying over for a nightcap and giving this a second viewing, I must be going now.

Brent Lorentson is a horror writer and film critic based out of Tampa, Florida. With a BA in Digital Film, he co-wrote and co-directed Scavenger Hunt. His short stories have appeared in various horror anthologies. In 2019 his short script Fertile Blood will be a part of the anthology horror film Slumber Party. He is currently working on his first novel A Dark and Secret Place set to be released in late 2019. Favorite Films: Taxi Driver, Fight Club, I Saw the Devil, The Wild Bunch, Dawn of the Dead, A Clockwork Orange, Pulp Fiction, Heathers, The Monster Squad, and High Fidelity.
A Good Day to Die Hard Mimesis (Blu-ray)