Posted in: No Huddle by Jeremy Butler on February 19th, 2013 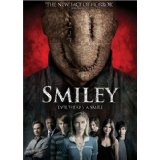 Never underestimate the power of the internet and the sociopathic tendency of college kids; the truest statement I can make about horror flick Smiley. Only college kids would hear a story about a would-be killer who could be summoned by repeating a certain phrase three times (I will not say the phrase simply due to that fact that I am a bit superstitious). Now, what if you knew that cost of summoning this murder was that the person you directed the phrase to would be killed; would you summon him? Well, I’m sure you already know the answer to the question.

Ashley is just striking out on her own: starting college, moving into her own place, and summoning a ruthless killer to murder a unwitting stranger (I’m getting ahead of myself, I’ll get to that). There’s an urban legend about a killer known as Smiley; it is said that if two people are web-chatting on the internet and one of them types the summoning phrase (still not going to say it) three times, Smiley will appear behind the other person and kill them. News of this legend spreads like wildfire. While at a party one night, Ashley witnesses the phenomenon firsthand as a group of partygoers intentionally summon the legendary killer. Brushing the entire thing off as a gag, Ashley tries to move on, but the suspicion that the legend could be true nags at her. Finally at the insistence of her roommate, she resolves to find out the truth for herself; bad idea.

OK, so when I think of the face of fear, a mask that will cause hundreds to quiver, a few choice masks from the past come to mind: the Michael Myers mask, Leatherface, and of course my personal favorite, the Ghostface mask. Never when I envision fear have I thought a mask that looks like a potato sack with a smiley face stitched into as something worthy of trembling; always nice to be wrong, because when that smiley face pops up from behind his victim, I instantly jump and have to look behind me to make sure it’s not behind me as well. Taking a symbol that usually brings about joy and turning it into an instrument of fear, that takes real talent. The power of the mask in this film comes from its presentation; it’s all about showmanship. You know it is coming, but then it appears so suddenly that despite your preparations you are caught off guard.

Since the original Scream debut back in the 90’s, many horror films have tried to duplicate the magic that the film had created, most of the time without success. After watching Smiley, I’m saying move over Kevin Williamson. I wasn’t really impressed when I read the premise, but now I get the genius of it; combining the modernization of social media with the longevity of urban legends to create a hybrid. Smiley is a suspenseful thriller that will make you jump from beginning to end. Once the music sets in and you see that person in the house all alone, walking down the dark corridor where they heard a mysterious sound, goosebumps will begin to rise. You may not want to watch if you are home alone. The film’s true strength and scariest revelation is the reality that everything that transpired in the film can easily occur in everyday life, all over the globe.

Jeremy Butler is a film school graduate of the International Academy of Design and Technology. He is been writing for Upcomingdiscs since 2012; however, movies have played a big part of his life for much longer. Favorite genres include horror, science fiction/fantasy, and comedy. Favorite movies are V for Vendetta, Boondocks Saints, Kiss Kiss Bang Bang, and The Godfather.
Mafia Game of Thrones: The Complete Second Season (Blu-ray)