Posted in: No Huddle by Brent Lorentson on February 19th, 2013 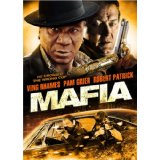 From the opening title card, Mafia does its best to fit in with the blaxploitation films of the 70’s, and even with Pam Grier in one of the key roles the film just doesn’t hold up.  It seems a lot of filmmakers and fans have on rose-colored glasses to the exploitation era (I’ll lump myself in with this group as well), but the filmmakers who attempt these films forget a lot of these films of the past had a strong political or sociological message they were trying to send.  Just making a film set in the 70s and throwing on some filters doesn’t mean you made an exploitation film; it simply means you captured the cheap low quality of the pictures they made back then.  Look at Jackie Brown (also starring Grier); that film captures the essence of exploitation cinema and looks beautiful, but Tarantino knew to focus on writing a strong ebony female to capture the heart of the genre.

Looking past the cosmetic style of Mafia, there is actually a lot to like here, and that somewhat makes its attempt to look like an exploitation film rather frustrating.  This is a film that could have taken place during any decade and still could work just fine.  The film opens with Renzo (Ving Rhames) locked away in his prison cell awaiting execution.  Haunted by the demons of his past, he recalls the events that brought him into custody.

What works the most with the film right off the bat is both Ving Rhames and Robert Patrick.  Seeing Patrick in the role of a cop trying to take down Renzo is one of the better roles I’ve seen him in lately.  Dupree (Patrick) also is getting ready to tie the knot but is a little worried if he’ll be accepted by her brother.  When it’s discovered that the brother is Renzo, it’s unfortunate more time isn’t spent with this relationship.  We hardly have a chance to see Rhames and Patrick on screen together, and honestly, it’s their relationship I found the most interesting thing the movie had going for it.

But the biggest shocker is Pam Grier.  She should be right at home in this role as a cop with a bad attitude, but watching her in this role was at times painful.  In Jackie Brown she carries that film with ease and reminds us why she was one of the queens of exploitation cinema.  But here her delivery of every line, every expression doesn’t just seem forced, but it seemed all the charisma and sexuality she once had seems to have vanished.

Though the story is mostly by the numbers, Rhames manages to hold our interest throughout.  When a hit on Renzo goes bad and we see him at work getting his revenge, instead of a storm of violence we see Renzo play against the normal expectations and decides to let his would-be assassins believe he is dead.  The plan doesn’t set well with everyone on the crew, and in fact it begins to form a splinter between Renzo and his #2 man.  The story is supposed to show us how bad Renzo is, but instead I found myself respecting him much more than other hoodlum bosses that have been on the screen lately.  If anything the real villain in my mind is Womack (Grier), who is willing to do whatever it takes to bring Renzo down and in turn avenge her partner’s death.

Overall the movie simply left me unimpressed.  There are so many gangster films out there, and it seems it’s all been done before and repeated time and time again.  As a straight-to-DVD release there isn’t much to complain about aside from it being painfully average when it could have been so much more.

Brent Lorentson is a horror writer and film critic based out of Tampa, Florida. With a BA in Digital Film, he co-wrote and co-directed Scavenger Hunt. His short stories have appeared in various horror anthologies. In 2019 his short script Fertile Blood will be a part of the anthology horror film Slumber Party. He is currently working on his first novel A Dark and Secret Place set to be released in late 2019. Favorite Films: Taxi Driver, Fight Club, I Saw the Devil, The Wild Bunch, Dawn of the Dead, A Clockwork Orange, Pulp Fiction, Heathers, The Monster Squad, and High Fidelity.
Gossip Girl: The Complete Sixth and Final Season Smiley