Nobody Gets Out Alive

Posted in: No Huddle by Jonathan Foster on March 1st, 2013 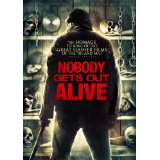 You know the story. A bunch of teens head out to a remote location to party, with most of the group getting drunk and/or high. Ignoring any and all warnings, they do something that invariably gets most of them killed, whether they deserve it or not. Most horror movies — like Cabin in the Woods or Wrong Turn — take this recipe and throw in their own flavor. Unfortunately, Nobody Gets Out Alive adds nothing new to the pot. Here, the location is a forest, the warning comes in the form of an urban legend AND the requisite Creepy Old Guy, and the teens make all the mistakes that are typical of a horror movie. The result is a dull, flavorless slasher flick.

The first misstep Nobody Gets Out Alive takes is not making the viewer care about the victims. We only learn approximately three of the seven names of the teens heading out to the woods and, honestly, I didn’t even care to learn them. These kids are raging stereotypes typical of any slasher movie: the jock, the stoner, the awkward nerd, the virgin, and the girl with loose morals. They’re all here, and all they do is whine, complain and snipe at each other at the slightest provocation. I found it incredibly hard to believe these people were ever friends. Because these characters are so irritating, they are extremely unlikable and I found myself rooting for the villain to kill them just so they would shut up.

Usually in a horror movie, it’s either pretty obvious what the victims did to earn the wrath of the Big Bad or the villain reveals his motive near the end of the film. In this case, the reason for our villain’s ire is established in the opening scene. Yet when he captures one of the girls, he delivers a (roughly) 20-minute rant about why he’s doing what he’s doing. Instead of making him creepy or validating his actions, it just makes him seem whiny and pathetic. A slasher flick is only as good as it’s villain, and this movie’s villain — while creative — loses a lot of credibility and goes from scary to just plain sad.

There are also some really strange plot elements in this movie. In the first scene after the opening credits, a doctor is talking to the mother of a girl who just got out of a mental facility. This girl ends up being one of the kids partying in the woods, but other than her parents forcing her to go camping, the issue of her hospital stay is never explored any further. Either the hospital scene shouldn’t have been included or her mental troubles should have factored in somewhere. (Maybe the deaths could’ve all been in her head, or she could have been killing them while making up a villain based on an urban legend to protect herself.) The other thing that bothered me is how the villain kills two people in the beginning of the film who haven’t broken his rules. They weren’t even in the way of his prey, so it just doesn’t make sense.

Lest you think this movie is completely beyond redemption, there are a few bright spots. I was suitably impressed by the villain’s choice of weapons. Sledgehammers, meat hooks, ropes, chains, and even a hammer and nails are used to off the unsuspecting campers. It’s like watching a twisted game of Clue. My personal favorite was when the sledgehammer was used like a croquet mallet on the clueless jock’s head as he got out of his car. It was so unexpected and out of left field, I had to applaud. The special effects are also really well done for a low-budget film. Every stab, slash and bash looked suitably bloody and effective. Major kudos to the effects team.

Nobody Gets Out Alive is a failed attempt at a unique horror movie. Sure, it has a decent enough premise, but the execution is completely flawed. The only way to get out of this movie unscathed is to pass on it.