Posted in: Disc Reviews by Brent Lorentson on February 28th, 2013 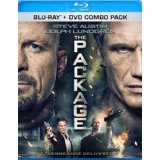 When an action title comes along and you see the name Steve Austin headlining it, the expectation level shouldn’t be too high (unless, of course, you’re an obsessed fan of Stone Cold).  I’ve seen more than my fair share of straight-to-video action films, so it takes a lot to deter me from giving a film a chance, and when it also gives Dolph Lundgren billing, well, the film becomes hard to resist. Tommy Wick (Austin) does work for a crime family to help work off the debt of his brother, who is currently serving time in the state penitentiary.  It’s not a stretch of the imagination to see Austin in this role, but from the start of the film, which opens in a bowling alley, I found it hard to believe he’s even trying to act.  With the bad quippy dialog and the zero-emotion delivery, it had me thinking The Rock was on par with Daniel Day Lewis by comparison.  But thankfully it doesn’t take long for Wick to start pushing people around and breaking tables with people’s heads to get me to forgive the bad acting.

It’s when Wick is approached to deliver a package to a rival gang member that the story begins to take off.  Everything, of course, seems simple enough, but “the package” is anything but the normal delivery. It appears everyone wants a piece of the package, though no one seems to be quite certain what it is that they are after.  Wick’s partner attempts to check it out; after all, it looks like nothing more than an old book, but before he can crack open a single page, the two men are attacked by a rival group made up of formal special ops soldiers.

From this point on the story flows at a fast pace, though a predictable one.  My biggest problem is that the film suffers from the characters never feeling relatable and we never have a moment to care what happens to anyone.  Any time a character spoke, it reminded me of a bad cartoon villain saying what he was going to attempt to do, and then doing it.  There’s a moment a character gives a brief monolog about what he intends to do to Wick, but the two are not even in the same vicinity; it’s just a moment to remind us ( in case we are too dumb to follow along) that this henchman is a bad guy.

Which brings me to Lundgren, who plays the sinister villain known only as The German.  He’s sick, and things are not looking to well for him, and he needs this ‘package’ to possibly make him better.  To believe a guy in his shape is on death’s door is a bit of a stretch, but crazier things have happened.  But it’s when we learn more about The German and his condition I couldn’t help but kind of root for the guy; after all, he’s just doing what he can to literally survive, while every other character seems to be driven by money in some form or another.

When the rival gang catches up to Wick, we have a moment where things get fun. Seeing Austin get manhandled by a female member of the rival group as she punishes Wick for killing her fiancée was a brief treat.  But the fun is quickly squashed when instead of Wick being human he seems to be superhuman; after all, he can take several blows to the arm with a crowbar, but a simple taser takes him down with ease.  Not to mention rounds of ammunition are used that can pierce through walls, but apparently all Wick needs is a body and not once, out of the hundred or so rounds fired at him, does he so much as have a bullet graze him or even get his shirt ripped.

By the time we finally get to see Austin and Lundgren on screen together, though the novelty of it is cool, story-wise it just didn’t matter.  I had hoped to see the two with more screen time together, fighting and blowing things up around them, but the reality couldn’t be further from the truth.

Despite the lack of originality, the film at least managed to be somewhat entertaining, which is more than can be said about numerous other straight-to-video releases.  Though I’m certain this had a relatively low budget, the look and the style of the film doesn’t suffer from this, and that is another plus in the film’s favor.  But, let’s face it, those of you heading to Redbox or Netflix for this title are not looking for plot; you’re looking to see Steve Austin beat the snot out of people and kill some bad guys, and for the most part the film delivers.

The Package is presented in its original HD aspect ratio 1.78:1.  The 1080p image is arrived at with an AVC MPEG-4 codec at an average of 23 mbps.  My first issue with the look of the film has to deal with how HD handles light;, sometimes it is capable of delivering great images, but in this case it gave a mist-like halo.  It happens enough to have me thinking it’s a result of shooting in several low-light situations.  Though the HD worked well with the low light and was able to pick up plenty of shadow and black definition, it seemed to leave the film with an uneven look.  When the shots consisted of tighter close-ups we get plenty of detail, almost too good, because you were able to tell at moments the blood was simply applied for a “wound” that wasn’t there.  Overall for a straight-to-video release the image quality isn’t bad, but falls very short of great.

The Dolby TrueHD 5.1 audio track explodes to life when the action fills the screen,  whether it is the bass delivering the impact of the punches or the numerous attacks of gunfire.  The sound quality during the action scenes delivers.  As for the dialog, not so much.  Some of the blame falls on the fact that when the dialog is spoken it is just a hair above a whisper, to make these big men seem all the more intimidating, but really all it did was frustrate me.

For fans of Austin or Lundgren, The Package is worth picking up as a rental, but not so sure as a purchase to own.  The replay value on this one is pretty low, unless you happen to be an obsessed fan of either actor.

Brent Lorentson is a horror writer and film critic based out of Tampa, Florida. With a BA in Digital Film, he co-wrote and co-directed Scavenger Hunt. His short stories have appeared in various horror anthologies. In 2019 his short script Fertile Blood will be a part of the anthology horror film Slumber Party. He is currently working on his first novel A Dark and Secret Place set to be released in late 2019. Favorite Films: Taxi Driver, Fight Club, I Saw the Devil, The Wild Bunch, Dawn of the Dead, A Clockwork Orange, Pulp Fiction, Heathers, The Monster Squad, and High Fidelity.
The Client List: The Complete First Season Nobody Gets Out Alive