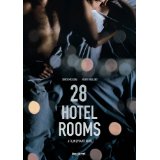 How long does it take for an affair to cross over from casual fling to a full-blown commitment? Well according to Oscilloscope Laboratories, about 28 Hotel Rooms. Chris Messina and Marin Ireland pair up to tell an engaging tale of two strangers who begin a long-standing relationship that spans cities, states, and possibly countries; the locations are bit harder to determine given that whenever we see the pair, they are never outside of a hotel. Another interesting factoid is that throughout the entire runtime of the film, neither one of the lead character’s names are mentioned.

Messina plays a novelist on tour for his latest book, Ireland is an accountant flown out to audit one of her company’s branch offices. The two have a chance meeting. She’s married and he has a girlfriend. Despite this, the two engage in a one night stand with the belief that they will never see each other again afterwards (yeah, because that’s likely).

When the two meet again in another city, neither can resist the temptation of repeating their previous passion. After this, they continue the affair all over the world; meeting in hotel rooms and creating a new world for themselves separate from their lives on the other side of the hotel room door. It isn’t long before circumstance changes and those fleeting moments that they share in hotels aren’t enough.

You know that it is truly gifted storytelling when you find yourself rooting for a couple that technically should be viewed as the bad guys, given that they are the ones betraying their significant others to be with one another. The story has a unique way of displaying the passage of time elapsing, revealing it through the depiction of different room numbers rather than months or years. The most interesting twist of fate is the role-reversal. Unlike the traditional way that an affair is usually shown, it is Ireland’s character who appears more hesitant and less committed.

Messina and Ireland at first glance appear to be a mix/match pair; Ireland is attractive but not quite the picture of a seductress that a man would have difficulty tearing himself away from; Messina, on the other hand, looks the part. Not quite the pairing I was expecting when I imagine this type of real-life situation. That being said, when these two interact on screen, the magic of their chemistry is undeniable. Both actors’ vulnerability as they play off one another is profound and tangible. Messina gives an excellent rendition of a man who only truly seems alive when is his in a hotel room with the love of his life and is matched by the caught-between-two-worlds performance that Ireland brings to the party. Watching as the two masterfully perform the highs and lows of the characters’ relationship has shattered all my previous notions about their pairing.

I do have to admit disappointment in what appeared to me to be a bittersweet ending. Granted the ending was moderately hopeful and caught me off guard (which is something I normally look for in a film), it just seemed abrupt and a misuse of the tension that was successfully built up. When you build that kind of tension, there is only one foreseeable conclusion, and to end it any other way just seems wasteful.

Jeremy Butler is a film school graduate of the International Academy of Design and Technology. He is been writing for Upcomingdiscs since 2012; however, movies have played a big part of his life for much longer. Favorite genres include horror, science fiction/fantasy, and comedy. Favorite movies are V for Vendetta, Boondocks Saints, Kiss Kiss Bang Bang, and The Godfather.
Lay the Favorite (Blu-ray) Chasing Mavericks (Blu-ray)